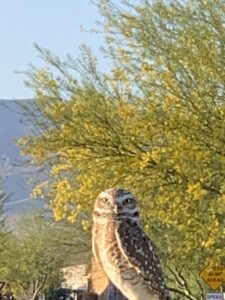 Owls come in all shapes and sizes, with about 19 different species of owls in the United States alone.  While some owls are able to adapt really well throughout the world, there are some species who are struggling to survive.  This post is about one of the species that is struggling – the Burrowing Owl.

My first encounter with a Burrowing Owl was about three years ago when we first visited the Las Vegas area.  The owl was sitting in the gravel, in the middle of the day, as we walked past.  I’m not even sure how I noticed it, it sat so still and blended in with the surroundings.  I had never heard of a Burrowing Owl before, and my first thought, was that it was a baby owl of some sort, that was lost.  I did not approach it, but did manage to get a few pictures, with the hope that I would be able to identify it once we got back to the RV.

The Burrowing Owls have been one of my favorite things that I look forward to when we come back to this area.  We have been coming back once a year for the past three years now, and I have had the opportunity to see these remarkable little owls each time.

Unlike other owls, that are usually nocturnal and live in trees, the Burrowing Owl is active during the day, and they live just as their name suggests – in burrows, underground.

It is not uncommon to see the little Burrowing Owls standing outside of their nests during the day.  They can usually be seen standing at the opening, or nearby in a field.  Occasionally, they will sit higher up on something so that they can scan the area for food.

While the Burrowing Owl is capable of capturing and killing small animals such as field mice, their diet typically consists of insects.  They are absolutely not an aggressive owl.  They do, however, stress and scare easily, especially if they are protecting babies in their nests.

In southern Nevada, Burrowing Owls breed between March and August.  The female owl will typically lay between 6 -12 eggs.  Those eggs will incubate for just under a month.  Once they hatch, the babies will emerge from the nest at about 1-2 weeks of age.  They will leave the nest at about 6 weeks of age, though they will remain in the area near their parents.  Anytime you see two owls standing at the entrance to their burrow, it is a good sign that this is a nesting area, and that it probably contains eggs or babies.  At times, there may only be one owl present, as the female owl will go back and forth from inside the nest, quite frequently.  By law, you are to avoid disturbing their nest during this time.  This includes everything from destruction of the nest for construction purposes, to just walking over the nest site (walking on top of some nests, especially if they are not man made, has the potential to collapse the burrow, harming or killing anything inside).

At an average height of about 7 or 8 inches, full grown, it is hard to resist approaching these little owls.  If they are standing in a field, away from their nest, they will more than likely just fly a very short distance away, if you get too close.  If they are guarding their nest though, you should do what you can, to avoid them.  Admire them from a distance.  If you get too close, they will begin to mimic a rattlesnake, by making a noise that resembles the rattling sound.  If you continue to get closer, they will change to a high pitched clicking, chattering sound.  They will also begin to bob their head up and down.  If they are doing this, you are too close and they are very stressed.  They may fly a very short distance away, in the hopes of drawing you away from their nest.

The Burrowing Owls that we saw last year, had made their nest in a ditch that was under a side road.  We had come upon them by accident (we were just out walking), and noticed that the babies were all standing outside at the entrance to the burrow.  Immediately, the babies ran inside.  One of the grown owls began to click and chatter fiercely, while the other flew off a short distance away – possibly to draw us away.  We retreated from the area, and went back in the direction from which we came.  We did not approach the nest area anymore after that, but continued to watch them from a good distance away on the other side of the main road.

Over the course of the next few weeks, while out walking,  we noticed that cars would pull up to the stop sign near the nest.  Most people would either not even notice them, or would just sit in their car, and watch them for a few moments, before driving off.  On occasion though, we did notice cars, that would stop, and people would get out – usually to take pictures.  They would walk right up to the nest.  The owls would make a lot of noise, and then fly off a short distance away.  At some point, someone had placed what appeared to be a bowl, right inside the opening of the burrow.  I am assuming it had food or water in it.  We never approached the nest, so I cannot say for certain.

This year, I was curious to see if the owls were using the same ditch under the road.  I knew I did not want to get near the area that the burrow was in.  I would want to stay a safe distance away, so as not to stress them out if they were there.  The owls were there.  Unfortunately, so was a family, with their small kids and 2 dogs.  The parents were setting a dish of what appeared to be dog food, on the edge of the sidewalk, right above the burrow entrance.  The owl sat chattering in the field.

Several days had passed, when I decided I would walk to the far edge of the field on my evening walk.  I brought my Go Pro hoping I would be able to zoom in a little better with that.  From where I stood, I was able to see an owl perched on top of a metal box.  I zoomed in and got a picture.  He was far enough away, that even with the Go Pro, the picture was so zoomed, it was pixelated.  As I turned to walk away, the sun was at my back, casting shadows in front of me.  I saw the shadow of an owl flying behind me.  Before I could turn to see it, the owl flew into the side of my head, feet first.  For such a small owl, he hit with some hard force, before immediately flying off and landing about 10 yards away in the field.  He then started to chatter.  When I looked back at the metal box, the owl I had gotten a picture of, was still sitting there.  This had been a different owl.  My immediate thought, was that there must be a second burrow in that field, and I had gotten too close to it.  The owl that flew into me, must be protecting the second burrow.  I instantly felt bad for the owl.  I had not even considered that there might be more than one burrow in that field.  I knew I wasn’t close enough to the burrow I was aware of, but I must have accidentally gotten close to another one.  I decided it was in the owls best interest (as well as my own), to no longer walk in that area. 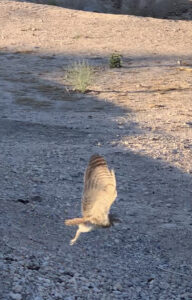 It is usually only under extreme stress that a Burrowing Owl will actually go after people.  They are not aggressive birds, but they will act out of fear and protection.  While they do seem to acclimate to motor vehicles, the same way other animals will continue to graze or walk through fields along the highway, they are stressed by foot traffic.  It is not often that we see any owl, let alone a small, quirky owl in broad daylight.  They are cute, and they are fun to watch.  Our fascination with them though, comes at a price to them, when we get too close.  It is one thing, to be unaware of their presence, and back off when we realize we are too close.  It is another thing, when we are intentionally (no matter how well those intentions are meant to be) walking up to their burrows, placing food around (and inside) of them, and trying to get an “up close” view of the babies.  None of my pictures are very good, and I’m okay with that.  It is because I choose to stay a far enough distance away.  I know these owls are extremely stressed – that is the only reason why one would have ever flown at me.  It seems, with this particular burrow at least, that it is quite common for people to just approach it, either hoping to get a better look, or because they think they are helping the owls out by “feeding” them.

While, I won’t be going back to that field, I will continue to look forward to (hopefully) seeing the Burrowing Owl whenever we visit this area.  It is okay to look for them.  It is exciting if you find them.  But watch them from a distance.  Love them, but leave them alone.