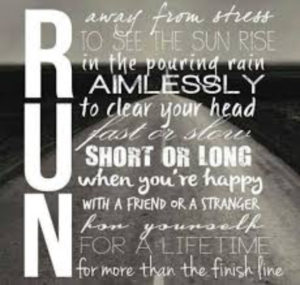 Do you run?  Maybe you walk, or ride a bike.  Chances are, if you do not, someone you know does.  Maybe it is a best friend, or a daughter or a mother, a sister, or even a brother or a son.  We all have activities that we enjoy doing.  I run.  I have been running for quite a few years now, and I more often than not, run alone.  Normally, I would run around the same time, on the same route.  There was a time when I didn’t really ever give much thought to where or when I was running.  I would put on my running shoes, and just go.  Then, in 2012, Sherry Arnold from Sydney, Montana was abducted and murdered while out for her early morning run, and it changed how I felt about running in “rural” areas, or areas that just were not very active with other people.  Still, I continued to run.  Every time I would run down empty roads, or on trails that led into un-populated areas though, I thought of Sherry Arnold.  If I passed anyone, I would make sure not to make eye contact or say “hi” – one of her accused killers says it was because Sherry said “hi”, that he turned around and knocked her to the ground.  I no longer ran after dark – it was barely light out when she was abducted.  Her story made me more aware, but it did not stop me from running.

Last month, Mollie Tibbetts from Brooklyn, Iowa, went missing while out on her late afternoon / early evening run.  For a month they searched for her.  For a month I watched and read while Mollie made the headlines of my news feed every single day.  Along with the rest of the country that followed her case, I hoped every day that they would find her – alive.  When they finally found her, she had been killed.  Encountered by her abductor while out on her run that day.

I did not know Sherry.  I did not know Mollie.  I saw in both of them though, myself, my daughters and my friends.  Because of this, I was drawn to them and the stories they have left behind.

I do not know exact numbers, because there are a lot of factors to consider, but, statistically, about 40% of all women are likely to be harassed in some way, while out running.  The chance of being abducted, assaulted, or killed, is much lower, but it exists- and it can happen to anyone at anytime.  You do not have to be female.  It can happen to males as well, though the statistics are much lower for male.  My point here, is that we should all be allowed to run without having to stress and wonder if we are “being safe enough”.  It bothers me that I no longer feel safe running after sunset or before sunrise.  If I am running trails, and I get a “bad feeling”, I turn around, cutting my run short.  If I am road running, and I get that same feeling about a person or a car that I am coming up on, I change my route or turn around.  I stopped saying “hi” to others on my run, opting instead to just look ahead and not make eye contact.  I spent many runs thinking about Sherry, and now I will think about Mollie as well.  I will worry even more when my daughters are out running.

This past weekend, I came across an article in Runner’s World, that was promoting safety for female runners.  Miles For Mollie, on social media, has a purpose that is twofold – 1)   dedicate your miles that you ran to “finish” Mollies run, and, 2)  show that you refuse to let fear keep you from doing what you enjoy – running.

Today, I ran in support of Miles For Mollie.  I ran 11.65 miles.  I ran alone, but thought of both Sherry and Mollie while I ran those miles.  I know that a social media movement isn’t going to put an end to the problem.  But it gets the word out there that we should not have to run in fear.  We can run a little stronger when we know we aren’t truly running “alone”.  So the next time you lace up your running shoes and head out the door, make your miles count.  Dedicate them to running safe and without fear.  Dedicate them to Mollie, Sherry and all of the other runners who had their runs cut short because of the violent act of someone else. 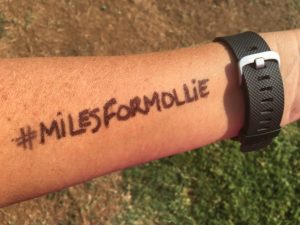 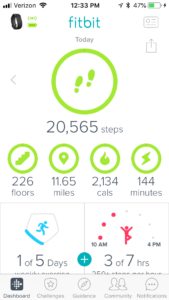 For more information on Miles For Mollie, click here.