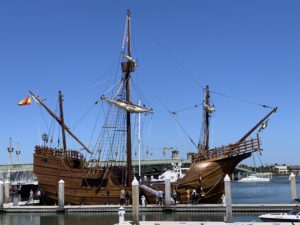 Some of my favorite childhood memories are of my grandparents taking me on vacation with them.  I can remember the excitement as we loaded their car up with suitcases, games, snacks and even school books.  It was usually late Spring and school would not be out yet.  We would have to bring our school books and work in them while we traveled, so that we did not fall behind in school.  I am sure that missing a few weeks of school was part of the excitement!

Every year we would go to Florida.  Our final destination was always Miami Beach (except for the year that Disney World opened the Magic Kingdom),  Along the way, we made many stops.  Some of those stops were repeated every year, so I remember them pretty well.

One of the places we always stopped at, was St. Augustine.  Until now, I had not visited Historic St. Augustine since my childhood.  While I still have very good memories of seeing it as a child, seeing it as an adult, is like seeing it through a completely different set of eyes.

A quick glimpse into the history of St. Augustine

St. Augustine is said to be the “oldest city in the U.S.”.  There is no doubt that there is a lot of history wrapped up in this coastal town.  History that dates all the way back to the 1500’s can be seen in the architecture of the old buildings, forts and cemetery.  The Timucua Indians lived along the coast of what today, is Florida and Georgia, as early as the 1400’s.  In 1513, Ponce De Leon came ashore near St. Augustine, and called the land La Florida. By 1565, Pedro Menendez de Aviles left Spain and settled St. Augustine, removing the French from the area.  St. Augustine remained financially supported by Spain until the 1800’s.  Over the years, St. Augustine would endure many conflicts.  It would be looted by pirates.  Attempts would be made to burn it down.  Castles, forts and seawalls would all be built in an effort to protect the city.  Eventually Florida becomes a U.S. Territory, and then the 27th State.  By the end of the 1800’s, hotels were being built.  Boardwalks appear along the shores of the sandy beaches, and a lighthouse is built.  The 1900’s sees Presidents staying at the hotels, and the beaches, piers and boardwalks, become an attraction for tourists.  St. Augustine has survived through conflicts, fires and hurricanes.  Today it welcomes over 5 million tourists every year.  It is home to over 13,000 people.

How to see St. Augustine

St. Augustine is one of those places where it doesn’t matter if you have “a plan” ahead of time.  If you have a few days to take in all of the attractions, and want to map out some sort of plan, perfect!  But, if you are only passing through, or have just a day to spend there, don’t worry – you can still see a lot of what this historic town has to offer!  For those who want to sit back and hear about some of this history while seeing the sights, there are plenty of trolley rides throughout the city.  It is also an easy city to walk through, with a lot of historical markers, so we opted to see it that way.  This way, we could stop in some of the shops, and grab a bite to eat, while taking in the sights at our own pace. 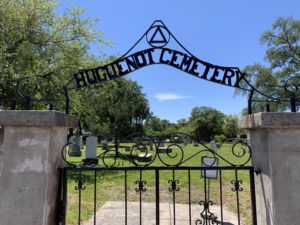 At the entrance to the city gates, sits Huguenot Cemetery.  This cemetery was built in 1821 and was meant to be the final resting place for those who were not Catholic.  Shortly after opening, Yellow Fever broke out in St. Augustine, and claimed many lives.  Many of those people were buried in this cemetery.  One of those people, was a 14 year old girl, whose body had been dumped at the city gates, and left there.  When no one claimed her, she was buried in Huguenot Cemetery.  She is one of the spirits said to be haunting the cemetery, as well as the streets of St. Augustine. 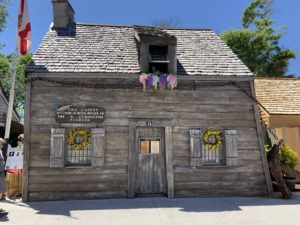 Just inside the city gates, sits the oldest wooden schoolhouse in the United States.  Also known as the Genopoly House, this schoolhouse has been preserved to reflect school life in the Spanish Colonial times.  It was built in the 1700’s, completely by hand, and is constructed of cedar and cypress wood. The pegs and nails holding it together, are also made of wood.  The schoolmaster lived upstairs from the one room classroom, despite not having any electric, running water, bathroom or kitchen. 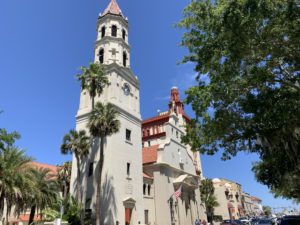 The streets are all lined with buildings that have been preserved to reflect their original architecture.  The Cathedral Basilica is made of stone, concrete and terracotta tiles, which were among the most commonly used building materials during the time. 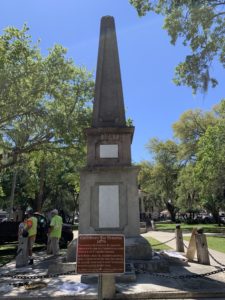 In the middle of the town square, La Plaza de la Constitution, is the Confederate War Memorial.  It was erected in 1879 as a way to honor those from St. Augustine who died during the civil war.

They were doing construction on the memorial the day we visited.  Instead of tearing the monument down (which has been the case down south with several of their monuments), the city decided to add plaques around the memorial.  The plaques, labeled Freedom, Interpret, Memory and Sacrifice, were being placed around the base of the memorial to offer different perspectives on the memorials meaning. 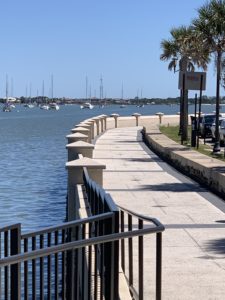 Along the waterfront of St. Augustine, is the Sea Wall – constructed in the mid 1800’s.  The wall was originally built by graduates of West Point.  Flooding has always been a threat to the city of St. Augustine, and the Sea Wall was a way of helping to protect the city from flooding disasters.  The original wall eventually started to break down, and was recently preserved (keeping the original wall in place).  Today, it can hold back a Level 1-2 hurricane. 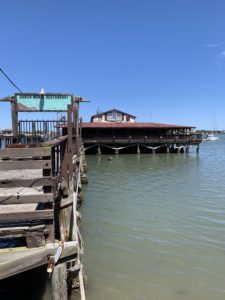 While walking along the seawall, we came across a pier that was closed off.  It lead to the Santa Maria Restaurant – a restaurant that I had eaten at several times as a child, during our visits to St. Augustine.  It was kind of sad to see it in such disrepair.  I had a hard time finding out exactly why it was closed down, though the most popular reason seems to be Hurricane Matthew.  Supposedly, the restaurant now has new owners who are hoping to make repairs and reopen.  For now, unfortunately, about the only ones eating there, are the seagulls…. 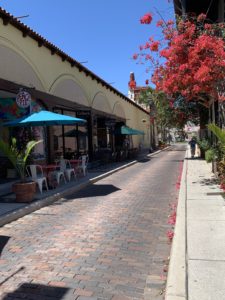 We made our way through the streets, one of which was the oldest street in the U.S. – Aviles St.!  I know this because, as we were walking down it, one of the trolley tours went by, and I heard him telling his guests about that particular street being the oldest street in the U.S.  During the 16th century when it was built, it was called Hospital St., due to the fact that the Spanish Military Hospital was located on it.  Today it is lined with historic museums, shops and art galleries. 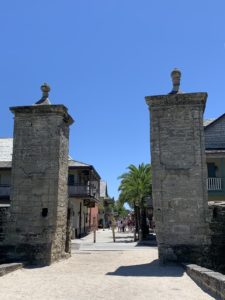 No day trip is complete without stopping for a bite to eat! 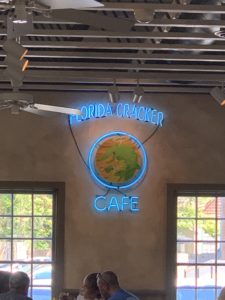 George St. was the perfect location to find a great place for some local fare.  A cobblestone road, open only to foot traffic, is lined with eateries and shops.  We chose a little seafood shack that offered outdoor patio seating. 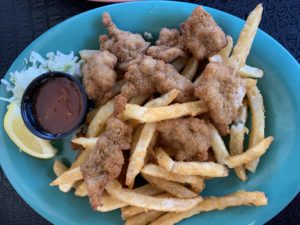 Local seafood also meant Alligator Bites were in order!  The food and drink (Sweet Tea because it IS the South), were all delicious! 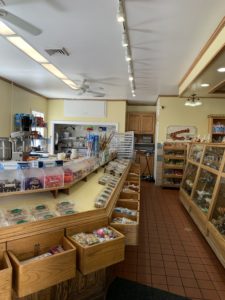 The Savannah Sweet Shop happened to be right alongside the restaurant, so, of course we had to stop in.  Who can resist a fresh made Pecan Praline?  Not me! 🙂

No matter how you plan (or don’t plan) your visit, you will be surprised with how much there is to see in this small, but very historic, town.  It is definitely worth the stop, whether it is for a day, or two.  Well worth the trip!  🙂