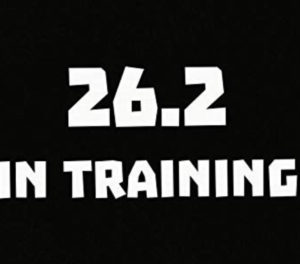 Running a marathon takes training, both physically and mentally.  Your brain and the rest of your body are not always on the same page when it comes to running. 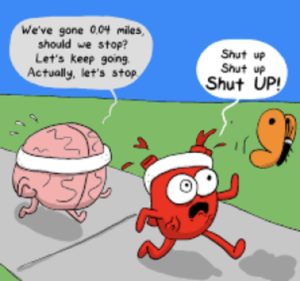 When I started making my Bucket List of things I would like to one day do, running a full marathon was the first thing I put on it.  At that time, I had only run a half marathon – once.  The thought of turning around at the end of that 13.1 miles, and running it back again, was something I could not wrap my head around at the time.  Since then, I have run a couple of the National Park Series Half Marathons, as well as some community half marathons.  I am now at a point where I have decided a full marathon IS something I can wrap my head around.  The thought of continuing on after that 13.1 mile marker doesn’t seem as daunting to me anymore.  I have decided if I can complete a half, I can also complete a full.  It will, however, take additional training and preparing – something that I have to work toward.  I decided, instead of just blogging about the race itself, I would blog my progress getting there as well.  Since my plan is to run my marathon sometime around the end of Fall, beginning of Winter this year, I will blog my progress every 4 weeks or so.  As of this post, I have not picked a race date or location.  I have looked at a few, but I am still undecided.  The ones I have looked at seem to be a little more strict on finishing times than other races I have run, so I do know that I am going to have to train serious in order to finish with an official time.

I am not training with an actual trainer or plan.  Everything I am doing, is on my own.  I do read a LOT of articles on running as well as nutrition (though I do have a nutritionist that I consult with regarding food choices and nutrition questions).  I am always open to suggestions and corrective criticism regarding what I do or do not do.  I believe there is always something I can learn from others who have done this before.

The Past 4 Weeks – Activity

I decided to make my first official day of training Wednesday, March 27th.  I had actually taken about a month or so off from running (due to a lack of somewhere to run).  Since it had been a few weeks since I had done any running, I decided I was going to start at the very bottom of distances.  I was going to start with just an easy, slow 1 mile run.  Not going to lie…after a month off, even a mile felt like several. 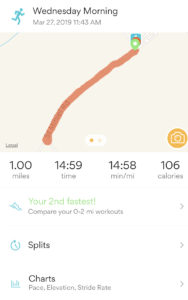 My plan going forward, was to run 3 times a week – Mondays, Wednesdays and Fridays.  I would increase my distance with each run by a half mile.  Each run would also start with a 3-5 minute warm up walk, and end with a cool down walk.  My focus at this point was not on speed, but more on building my distance back up. 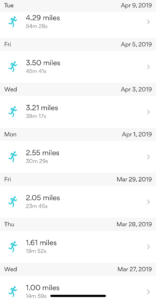 By Friday, April 26th, I was up to a 7 mile run.  At this point, my pace is within my average pace that I run distance in.  My runs have felt good, and despite a couple of really windy days, they have not felt difficult.  I even had one day where I ran even though there were 25 mph winds (anyone who knows me, knows I do NOT like running in wind).  It was during my cool down walk after running, that I found out we were in a tornado warning!  That must have happened during my run, because we were not in it before my run.  I guess if I can run through that, I can no longer use wind as an excuse…  🙂 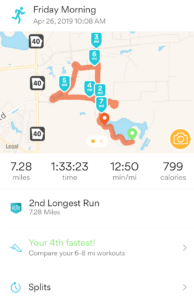 The Next 4 Weeks – Activity

Now that I am up to a 7 mile run, I am going to cut back on increasing my distance with every run.  I am still going to run Monday, Wednesday and Friday.  Instead of increasing a half mile each run, I am going to start doing 2 short and 1 long run each week.  My Monday and Friday runs will be my short runs.  My long run will be on Wednesday, and I will still increase this run by half a mile.  For now, my short runs will be anywhere from a 3-4 mile run.  I may try to work on my speed a little during my short runs.  My long runs will still be done at a comfortable pace.

In addition to my running, I am going to incorporate some rope training on Tuesdays and Thursdays.  I do not always have access to a gym, so I have had to get creative on what I can do in addition to running.  I ordered some Battle Ropes, and I have been doing some work with those, just not on a regular basis.  I will start working out with them regularly twice a week.  If you have never tried Battle Ropes before, they provide a really good upper and lower body workout, as well as a good core workout. 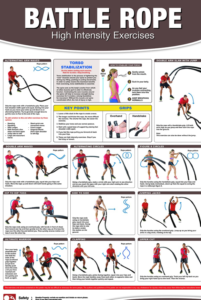 Also, I am admittedly not good about stretching.  I NEED to start doing that both before and after my workouts!

The Past 4 Weeks – Nutrition

Normally, I am pretty good about how I eat.  However, when I am not running or working out (like I had not been doing for that month), my eating habits sometimes take a hit as well.  I had been in the process of talking with my nutritionist, and getting back on track with the foods I was eating prior to my running starting back up.  In the beginning when my distances were shorter, my calorie, carb, and protein amounts were fine where they were.  As my distances increased though, I felt myself running out of steam sometimes, or my recovery afterward would sometimes be rough.  We made some adjustments to how I was eating when I hit the 4 mile distances, and that helped.  I upped my carb intake as well as some of my protein, which ultimately upped my calorie intake as well.  By the time I had reached my 6-7 mile runs, I decided I needed to listen to my body, and adjust when and what I was eating according to how my running felt.  I think I now have a pretty good handle on my eating and how it affects my performance.  Without actually laying out my meal plans (because that would be boring and long), I incorporate Go Macro bars, protein shakes, oatmeal, lots of fruits and veggies, poultry, seafood, quinoa and sweet potatoes.  I am not limited to just these foods, but they make up the majority of what I eat.  Weekends are usually a free for all with food – though I try not to get too free 🙂  For now, the way I am eating, seems to be working good for me.

In addition to nutrition, hydration is equally important.  I make sure to drink plenty of water every day, not just on my run days.  I drink a minimum of 70 ounces of water a day.  On my run days, I run with a camelback, so I am drinking that in addition to my 70 ounces.  At first, drinking this much water was hard for me to do – I would have to almost force myself to drink it.  Now, I drink it without even thinking about it (even though I do still make a big deal out of the fact I drank that much water, every time 🙂  ).

So there it is!  My first month of training for what will be my first FULL MARATHON!  I know I am going to have to make some changes and adjustments as I go,  I know it is going to get a lot harder before it gets easier (if it even gets easier).  By posting my progress though, I hope to not only hold myself accountable to my training, but it will force me to analyze better what I am doing, and what I need to do differently or in addition to. 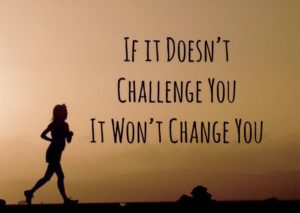