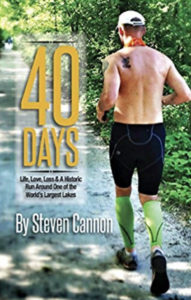 “The number 1 reason to adventure, to go beyond your comfort zone, is that with each mile, each hour, you uncover a bit more of who you are at your core” – Steve Cannon

I have finished April’s Bucket List book!  If you are someone who enjoys adventure, the outdoors, running, or just a good book about human spirit, then you will enjoy reading 40 Days.  It is the true story of one man’s journey as he ran, for forty days, around Lake Michigan.

Steve Cannon’s life could have gone in any direction years ago when he was failing out of college, and becoming addicted to alcohol.  Instead of spiraling downward, he chose to lace up a pair of running shoes, and begin what would be one of many adventures he would embark on in the years to come.  What started as a few short races, turned into half and full marathons.  From there he ran across his home state – the state of Iowa.  He runs, he bikes, he kayaks and he skis.  But he refers to himself, simply as an “adventurer”.

40 Days takes us along with him on his 1,037 mile run.  He writes his book almost in diary form, each chapter is a day on the run.  When you are running a marathon a day, for forty days straight, you have plenty of time to reflect.  He writes about his inner demons that tested him throughout his life, and how, through running, he has been able to discover his true self.

He talks about his connection to his surroundings on the run – how he came to refer to Lake Michigan as “Mom”.  Mom was literally, always on his side.  She provided him with the relief he needed, whether it was from her cool breezes during the heat of his running, or the cold water bath she provided at the end of the day, to just sit in and repair his muscles after running 26 miles every day.

Steve Cannon was the first person to run entirely around Lake Michigan.  He started and finished in Chicago.  For forty days he ran.  When he needed to walk, he walked.  He disconnected from the “noise” that surrounds our everyday life, and connected with himself and the adventure outside.  By sharing his journey, the good with the bad, he shows us that he is no different from any one of us.  If there is something that you want to do, the only person who can stop you from doing it, is yourself.

I found this to be an excellent book.  I thought it was an amazing story about the great things that can happen when you push yourself further than you ever thought you could.

I would highly recommend this book to everyone – it shows us that we are capable of so much more than our minds will lead us to believe.