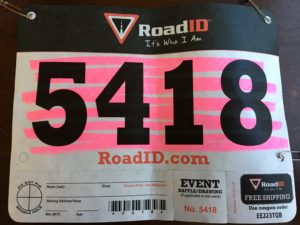 I do not normally “bark” about myself directly, but today I am going to, because I am actually pretty happy with myself!

A few years ago I stumbled onto a website about the National Park Half Marathon Series.  My goal, since then, has been to run one half marathon within that series each year, until I have run each one at least once.  This year, I was signed up to run the Rocky Mountain Half in August, in Estes Park, CO.  The challenge with this goal of mine, is being in a location close enough to the location of the race, AT THE TIME OF THE RACE.  Originally I thought I would be closer to Estes Park than I ended up being.  At the last minute, I had to defer my race to a different one (at this time I have not decided yet which race that will be).  I was afraid I was not going to get a half Marathon in this year.  And then, I saw a sign for a half marathon right here!!  So, yesterday, with two hours left before the registration cut-off, I threw my name on the list!  Panic instantly set in when I noticed that most of the people on the sign up were signed up for either the 5K or the 10K.  There were not nearly as many “halfers” as I thought there would be.  I am not a fast runner, so the more people I can get lost in for something like this, the better.  I decided I would not let numbers discourage me though – at least not those numbers.  The only numbers I decided I was going to care about, were the numbers on the clock at the finish line.  I have only run one half marathon where I finished in under 3 hours (I do want to add that those National Park races are usually quite hard terrain wise).  Last year I really wanted to come in under 3 hours….I finished at 3:01:12!!  So close, but no.  So, this morning, I had only 2 goals – run the entire race without stopping or walking, and finish in under 3 hours!

At 6:00 a.m. this morning, there I was, on the Start / Finish line, camel back full of water strapped across my back, and my running belt stuffed with energy goo packs!  I am a fan of “cup free” races, even though this one was not.  I was not going to have to stop at the aid stations though at least.

The National Anthem played, and we were off!

The weather was perfect!  No wind, and temps right around 60.  There were probably only about 20 half marathon runners total.  I was one of about five women, and I am pretty sure I had at least 20 years on the oldest of any of them.  So, I was not shocked at all when the whole group pulled ahead right off of the line.  I will admit, I had a moment right then, where I thought that they would have the whole race broken down before I would even be close to finishing.  Would they even realize they still had a runner out there somewhere?  As quick as I thought that, I dismissed it.  I was running this for me.  As long as I met my two goals that I had set for myself, I would be happy.

I stayed behind, running at my own pace, listening to my playlist – a lot of 80’s “rock” mixed in with some 70’s disco 🙂  Did I say I was probably old enough to be everyone’s mom? 🙂

At the halfway point, it was a turn around, heading back the way we had just come.  Turning around though, loomed a very long, steep hill.  I have actually run this hill quite a few times before, so I was at least aware of it.  I have only had two, maybe three, runs where I was able to run it without stopping and walking.  I was determined today that I would NOT stop!  I powered up that hill with Gloria Gaynor as she told me “I Will Survive”!  And survive I did!  Not only did I get up that hill without stopping, I made a new personal record doing it!  I did not know this of course, until I was done.  I even passed four people on that hill!!

Before I knew it, I was passing the turnaround point for the 10K-ers.  I still felt great, and knew I only had about 3 more miles to go.  I could still see runners ahead of me, so I knew they would not have the finish line all packed up before I got to it.

As I passed by the turn around for the 5K-ers, I realized there was another very long incline, though not as steep, up ahead.  I just kept my thoughts on the finish line, which I knew was just over that incline, and I powered on.  I was still feeling great at this point!  Even more so, because I knew it was so close to the end.  I managed to pass one more person just before the final stretch, and then I gave it all I had, which wasn’t a whole lot, but I did pick up a little speed!  I crossed that finish line in 2 hours, 30 minutes and 40 seconds!!  I had accomplished both of my goals, and I was super happy!!  That is officially my fastest half marathon time yet!!  And that is something I totally wanted to “bark” about!! 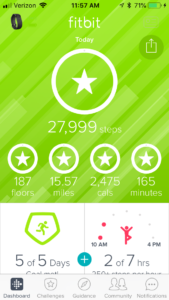 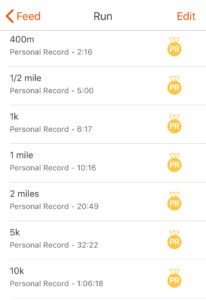 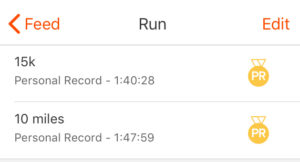 I actually had several personal records on this race!  Some days, a run is just “on”, and this was one of them!

And now, it is cold brew coffee time, followed by a well earned hot dog!!!  🙂

Till next time, keep on chasing your goals!!