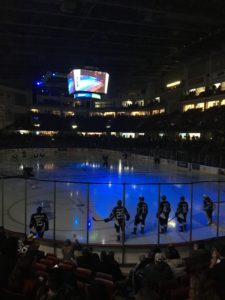 I am not a t.v. sports fan.  I do not really follow any particular sport.  I will occasionally watch a football game when it comes on, and I’m usually good for catching a few events during both Winter and Summer Olympics.  Otherwise, if I am not actually at the game, it just isn’t going to hold my attention very well.  I have found though, that most sporting events where I have actually been there, watching it, I have really enjoyed the sport – no matter what it was.  Whether it is a result of getting swept up in all of the adrenaline, excitement and yelling of the crowd, or the smell of hot dogs and popcorn, I seem to always have a really great time.

Last night I made it to my first hockey game!  Located in downtown Boise, the Century Link Arena is host to a variety of different events.  Walking in, the first thing I noticed was the size of the arena!  (Okay, that’s actually a lie…the first thing I noticed was the amazing smell of popcorn that filled the air – I was already a fan)!  The outside of the arena seems deceiving to me though, when compared to the size of the inside!

Inside, the ice rink was huge.  There was both upper and lower level seating all the way around, as well as food and souvenir vendors.  The only thing dividing the rink from the seats, was a glass (plastic?) window with a net above it, to prevent the hockey pucks from being thwapped into the fans.  Our seats were bottom level, sitting about level where the netting met the glass, just off of the goal net.  It was a good seat to have, because every time they slammed the puck, it made me jump when it hit the window or flew into the net!  Not to mention we were nice and close up every time someone got slammed into the wall – and it was LOUD! 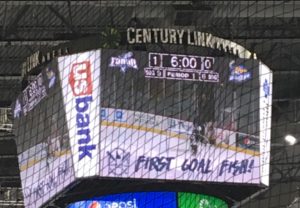 I know absolutely nothing about how hockey is played.  Beyond knowing which goal each team was supposed to be slamming the puck into, I was at a loss.  Music would play, and the crowd would break into a cheer all at once at the end of it.  I am sure this happened due to a really good play by someone on the ice.  Numbers randomly appeared on the score board – without a goal being made – so I am not really sure what the scoring system is for hockey.  The crowd would also randomly break into these little chants, that sort of reminded me of the little “hey batter, batter” chants at the Little League games I went to as a kid…I had no idea what they were shouting though, so I refrained from joining them.  Well, I did hear “goalie you suck” at the end of the chant…but that was it.  I’m not even sure who’s goalie they were shouting at – I would hope the opposing team, but really, who knows.  There were times, I felt like the crowd could go either way on who they were yelling at.  I did, however, understand a goal being made, and was quick to yell and cheer and join in when they scored! 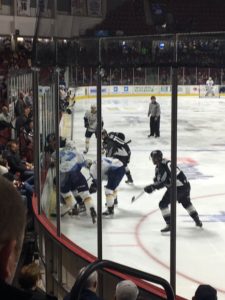 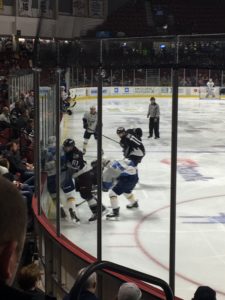 I have to say, that my most favorite thing in a hockey game, is the attitude those guys throw around to each other on the opposite team.  I know I am not alone on that either!  When those gloves come off and get thrown on the ice, the crowd loses it – myself included!  The fights are awesome!  I never seem to catch what started it, but I saw a glove get thrown on the ice, and the next thing I knew, two of the players were going at it pretty hard, right in front of us.  The ref was super quick to break it up, and admittedly, I was a little disappointed.  It was exciting 🙂  The crowd was going crazy, so I know they were enjoying it as much as I was.  So I don’t feel bad.  They really should consider letting it play out a little, see how it goes. 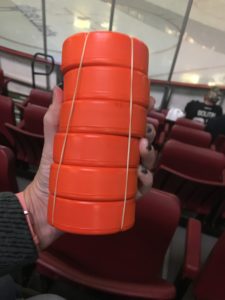 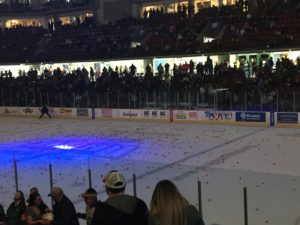 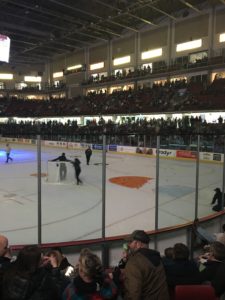 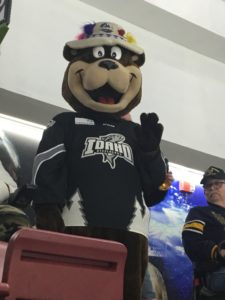 The mascot went out and picked a puck, and the winner of that puck won the raffle money. I do not know who the winner was, but I do know who the winner was NOT.  Throwing the pucks out onto the ice was so fun, and so scary!  Someone got hit in the head with a flying puck that fell short of the rink.  She laughed though, so it must not have hurt too bad.

With 8 minutes left in the game, the fighting shifted from the rink, up into the stands!  Everyone was shouting “Fight! Fight!”, and I was looking all across the rink at all of the players, but I wasn’t seeing anything.  Then the players stopped playing and turned to look up into the stands, just over from where we sat.  People in the stands were fighting, not the players!  I have no idea what the fight was over, but, for some reason, I wasn’t even surprised.  Like everyone else, I was sort of entertained.  I feel like it wasn’t anything unusual for a hockey game.  The cops broke it up, moved them around, and the game resumed. 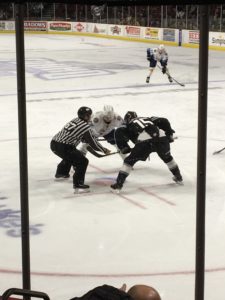 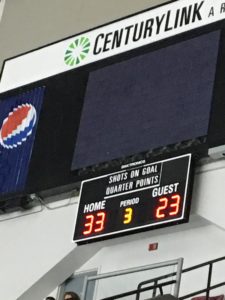 I also know that I had a lot of fun, despite not understanding anything at all really about hockey.  I may have to read up on it a little bit, so that the next time I go to a hockey game I can understand things like scoring, and plays, and exactly why it is that the goalie sucks…It will definitely help with describing the game if I post about it.  I won’t lie though, the fights were super entertaining 🙂