The time had come to try out the new kayaks (look for my kayak review later this week), and we could not have asked for better weather, or a better place to take them, than The Great Salt Lake!

Before heading out, I not only checked the weather and water conditions for the day, but decided to do a little research on the lake itself.  There are some interesting facts about the lake that I found out.

We probably are all aware that the lake is salty, but just how salty?  The salinity of the lake actually changes very frequently due to the level of the lake water.  The lower the water level, the higher the salinity.  The salinity of the lake ranges anywhere from 5% to 27%.   The day we were there, the salinity level was at about 17%.  The level is high enough that you won’t sink in the water, you will only float.  We did not even bring our life vests in the kayaks with us.  I’m not sure I saw anyone there with a life vest actually.  And just in case you were wondering, the salinity of the ocean is about 3.5%, so it is much saltier than the ocean.  In fact, the North arm of Salt Lake, comes in just under the Dead Sea in terms of salinity.  That’s pretty salty!

Thanks to the salinity level, there are no fish in the Great Salt Lake.  So, if you are looking for a nice day out fishing on your kayak, you need to be looking somewhere else.  The only life that is found in the water here is algae and brine shrimp (not the kind of shrimp you want to serve with cocktail sauce).  Brine flies gather along the waters edge, but they do not bite or bother anyone.  The brine shrimp feed on the algae in the water.  I did not get the opportunity to see any of them, but the water was incredibly clear, making it possible to see the bottom in most spots.

There is a faint odor, or smell, to the lake that is noticeable when you are on the shoreline.  It has a sort of dead fish, sulphur smell to it that comes from the breakdown and decay of plant life along the shallow edge.  The further out you go, the deeper the water gets, and the smell disappears.  At its deepest, the lake is about 34 feet deep.  The majority of the lake though, is fairly shallow.  It was right around 14 feet where we were at.  What it lacks in depth, it makes up for in length and width.  At its widest, the lake is 35 miles across.  It is 75 miles long.  That is a LOT of paddling if you are planning on paddling the length (or width) of the lake!!  I was under the false impression that I could spend my kayak trial by paddling my way out to Antelope Island (which is located in the Southeastern part of the lake).  Antelope Island is actually one of ten islands found in the lake, is the largest island, and is the closest island to where we put in at.  Looking at it, I thought, “easy day”!  Long story short, we never made it to Antelope Island.  Looks are incredibly deceiving on that lake!  That will have to be an overnight kayaking trip, 1 day to get there, and 1 day to get back.  Apparently, its almost 10 miles away from the marina.

With Antelope Island no longer a destination, we decided to just paddle out and enjoy the scenery, the warm weather, and the peace and quiet that comes with being on the water.  For me, a large part of my enjoyment of kayaking is the peace and relaxation that it brings.  It is an activity that can be as physical as you want it to be, and at the same time, very relaxing.  And this day was perfect for that.  In the distance you could see mountains in both the Wasatch Mountain Range as well as the Oquirrh (pronounced ook-er) Range. 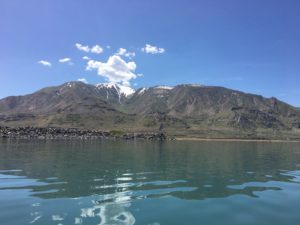 When I had checked the weather and water forecast earlier that morning for the marina, it said that the water had “moderate chop” to it.  This means that there are large wavelets, with crests just beginning to break.  By the time we arrived, there was virtually no wind at all.  No chop to the water, and the air temperature was hovering right around 80 degrees.  Off in the distances, it was a little hazy, but once out on the water, you could see all of the surrounding mountains clearly.  Of course I had to stick my hands and feet in the water, just to see what it was like, and to my surprise, it was actually pretty warm (I think they said it was about 63 degrees that day).  I did “taste” the water – and I do not recommend doing that.  Not only is it probably not healthy to ingest that water, but it tastes absolutely awful.

After paddling out for a couple of hours, we decided it was time to turn around and head back.  During our time out on the lake, we did see a few people on paddle boards, and several sailboats out enjoying the nice weather as well. 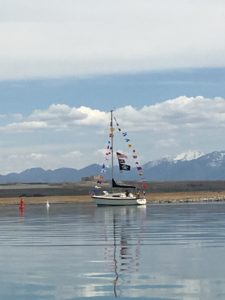 We made our way back into the inlet for the marina.  The inlet is surrounded by large rocks and cliffs, and is really quite pretty.  It was sort of like going through a little canyon area to get in and out of the marina. 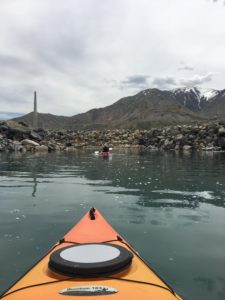 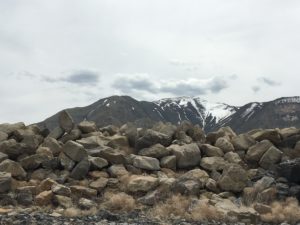 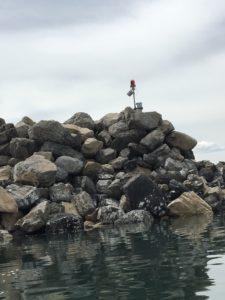 Once back to the boat ramp, I stood up and realized I was completely covered in dry salt.  The marina provides a freshwater faucet at the top of the ramp though, so in no time we had the kayaks rinsed, loaded and ourselves rinsed off as well.  All in all, it was an incredibly fun day!  I had been so excited to get out and test the kayaks, and neither the kayaks, or The Great Salt Lake, let us down!  It was definitely a great day!  I cannot wait to get back in the kayak, and be amazed at all the adventures it provides!

Until the next adventure, paddle on friends!