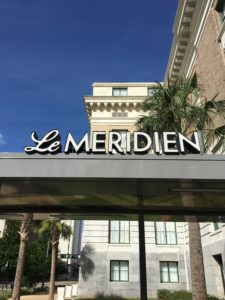 Airports, road trips, weddings, cruise ships, haunted cities and historic hotels,,,this has been a crazy (in a good way) week or two!  With so much going on, in such a quick amount of time, it has been difficult knowing where, or how, to even start this post.  I found myself completely fascinated with two stops on this trip, and I have decided to focus this post on one of those two places – Le Meridien, in Tampa, Florida.  Savannah, Georgia being the second place, and a future post.

Tampa, Florida as we know it today, is a very popular, busy and growing city on the gulf coast of Florida.  At a quick glance, it feels congested, over populated and the traffic is insane.  But, put me in a place I wouldn’t otherwise choose to go to, and I am going to find something interesting about it at the very least.  Don’t get me wrong, I love Florida!  I love the heat and the humidity, the beaches, the ocean and the gulf, the food and the drink.  Having to drive in unfamiliar cities tends to stress me out a bit though, and if I am in the middle of a city, I am not really on the beach, which is what I truly love about Florida – beach life!

Tampa is a city built on history though, and the history of this city alone, makes it incredibly interesting.  Add to that, the fact that the building which is now Le Meridien, is a large part of that history, made for a great stay!  And the staff who work there – fantastic!  I cannot say enough about how welcoming, helpful and friendly they were!

Le Meridien is actually a chain of hotels all over the world that specialize in taking old buildings and turning them into upscale hotels, while maintaining the original history of that building.  To fully appreciate Le Meridien Tampa, you will need to step back in time with me, to a time when Tampa really got its start.

In 1902 construction was started at 601 N Florida Ave in Tampa, Florida.  Three years later, in 1905, construction was completed and Tampa was home to what was originally called “The U.S. Post Office, Courthouse and Custom House”.  It later became the U.S. District Court for the Middle District of Florida around 1962, and in 1974, it was listed on the National Registry as the Federal Courthouse.

Tampa, like most places, has always had its share of crime.  In 1919, with the ratification of the 18th amendment complete (taking effect in 1920), prohibition brought a whole new level (and type) of crime to Tampa.  Tampa was now known as one of the “wettest” spots in the United States.

Prohibition failed miserably, especially in Tampa, where there were local bootleggers, moonshiners and international rum-runners.  The bootleggers were made up of mostly Italian immigrants.  In an area where Cubans and Spaniards once had the monopoly on crime, with Prohibition, came the underground world of organized crime, and the Italian mafia.

Now, I could get totally carried away on this subject, as it has always been of interest to me.  In fact, once I looked into the history of this city, I was hooked.  When I found out that the very hotel we were staying in, was actually, at one time, the very building where many trials from Prohibition forward were held, I was completely intrigued!

This building, which was once the Federal Courthouse, was the site of many historic trials.  Tampa saw the up-rise, and take down, of bootleggers and gangsters like, William Flynn – the “Daddy” of moonshiners in Tampa.  Charles Wall – Ybor City and Tampa’s “gambling czar”.  Santo Trafficante Sr, a mafia leader in Tampa for more than 20 years.  The list goes on, as do the crimes tried in the Federal Courthouse of Tampa.

In 1998, the Federal Courthouse moved to a larger building about two blocks away.  The original building was now empty and owned by the City of Tampa.  Years passed as the city tried to decide what to do with the building,  Developers were asked to submit ideas, and in the end, the company that was picked, was one that was known for renovating urban properties, and turning them into hotels.  Rooms that once housed the Judges Chambers and holding cells for prisoners, now are upscale rooms, bars, and a pool area.

When you first walk into the lobby, there is a business center.  The desk for the center is the original Judges Bench which once was located on the 4th floor of the courthouse.  You can still see the nameplates and buttons on the bench. 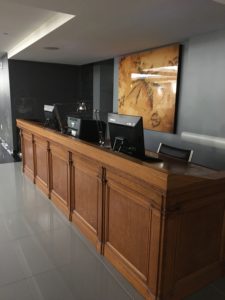 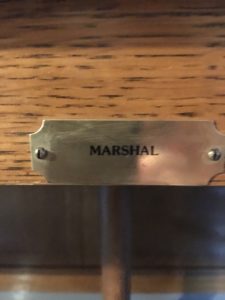 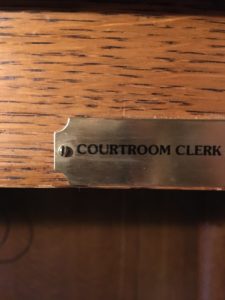 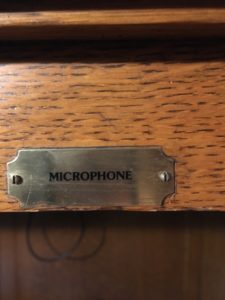 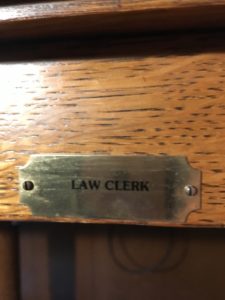 On the walls are replicas of the architects original blueprints. 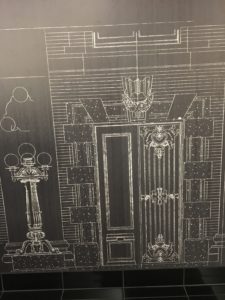 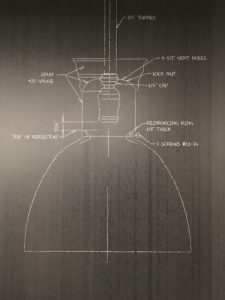 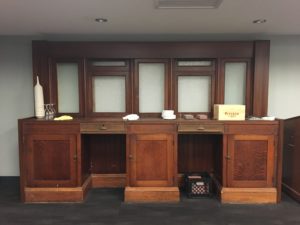 Our rooms were on the first floor of the hotel.  These rooms, at one time were holding areas for prisoners.  The pool area outside of our rooms, were where the “paddy wagons” unloaded the prisoners to be placed in the holding cells. 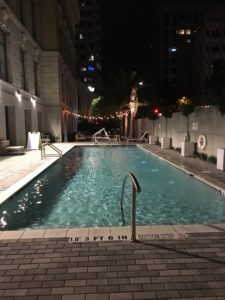 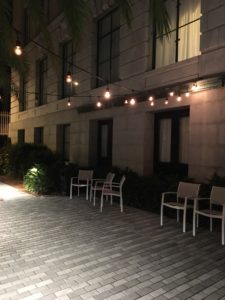 Around the corner from our room, was the room that once was the District Judges Chamber. 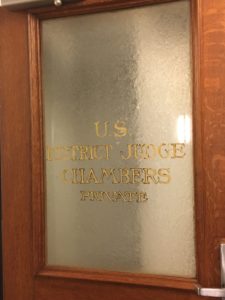 Wander up to the 2nd floor of the hotel, and you will be in what is now the Bizou Lounge.  A beautiful bar and cafe, with a coffee shop and pastries as well!  When you first step off of the elevator (or come up the stairway), you will see a bench outside of the lounge.  This was the Juror’s Bench.  Step around and into the lounge, and what is now the hostess stand, was once the Witness Stand.  Walk to the back of the lounge and enter the restroom, and the window that is in the restroom, is the original window with bars on it from the courthouse.  One of the only windows still there with the original bars on it. 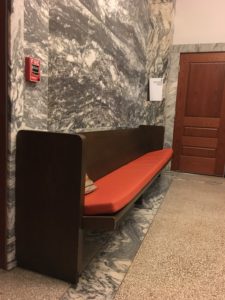 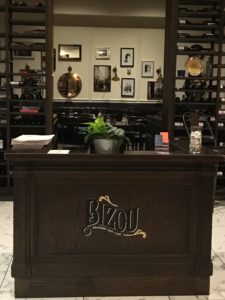 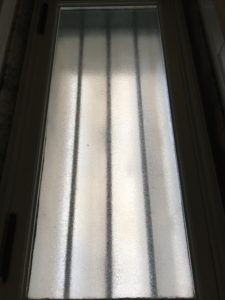 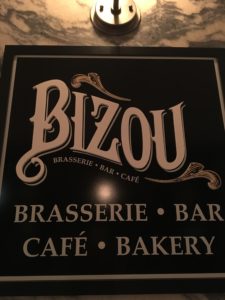 The gold elevator was also preserved to maintain its original appearance. 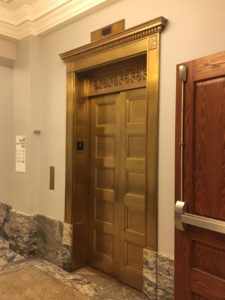 On the 4th floor, you will find the Courthouse Ballroom.  Now, the doors to this room were closed, and the lights were out.  But, we wandered in anyway, unable to ever find the light switch.  We had to use the lights of our phones to get the pictures we took.  The Golden Eagle is the original and is to this day, untouched.  The ceilings are hand painted from over a century ago. there are also leather doors in this room.  However, because we could not see anything, we were unable to find them .  I was later told that they had been taken down for repair, and may not be rehung yet. 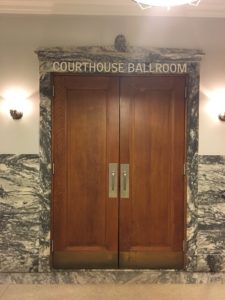 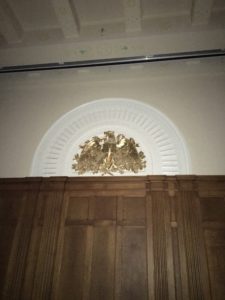 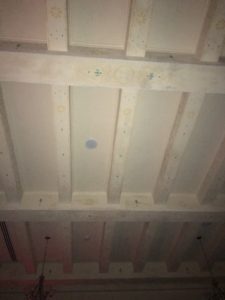 Other rooms throughout the hotel, are labeled with what the room used to be back in the day.

Today, the building is an absolutely beautiful hotel.  They have done a fantastic job at restoring and maintaining much of the building’s history.  Upon check-in, they are happy to give a brief explanation of the history of the building, and hand out a map so that you can do a self guided tour.  Once a month, they do an actual walking tour through the hotel, as well as other historic buildings in the area.

I would be remiss if I ended this post without mentioning how absolutely terrific and helpful the staff was while we stayed there.  Everyone from the front desk, to the bellhop to the valet guys!!  Because of all of them, our stay at Le Meridien was a most enjoyable.  Thank you!

Holly made sure I knew about the buttons under the Judges Bench….as well as the barred window in the bathroom.  Honestly, I think she would make a great tour guide!

And then there is Dane….Dane was nice enough to let me slip into the meeting room to get a picture of the Post Office Desk.  There may have been a little meeting going on…but no one seemed to mind much.  I am sure this happens a lot 🙂

Not pictured, is Jay.  He was one of our bellhops as well as our shuttle driver.  He definitely entertained us with stories while he drove us around!

So, long story short, even though Tampa today is not the place I would choose to go to for unwinding and relaxing, it really did have me wrapped up in all of the history that it has to offer!  If you are into stories about Prohibition and Mafias, Tampa is a place you may want to put on your list to visit!