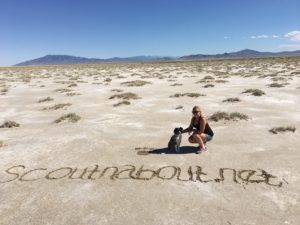 Have you ever flown into Salt Lake City, and looked out of your window?  If you have, you probably saw the salt flats, which cover over 30,000 acres of land in Utah.  I always wondered what it would look like up close, what it would feel like – could you even get that close to it?  From the sky, it looks like there is nothing else around them.  Come to find out, there is more to the salt flats than just barren, white land.

At first glance, from a distance, it looks like snow.  It could be 85 degrees outside, but sitting inside the truck, on a cloudy day, it looks like it is freezing outside!

At other times, you can look out over the flats, and in the distance, you can see a mirage that looks there is a huge lake out there.  In reality, it is bone dry.

When it does rain, and water forms on the flats, the chunks of salt that stick up from the water, resemble chunks of ice sitting on a thawing lake.

I am not really sure what I was expecting when we pulled into the flats to get an up close look at them.  I guess I thought it would be like salty, beach sand.  Something that the dogs would lick, and it would blow all on their fur and in our eyes.  It turns out, it was none of that. It was hard, like rock. 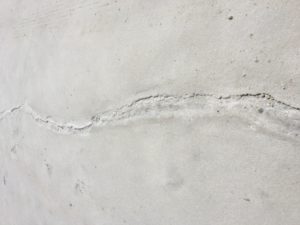 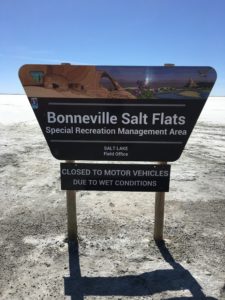 In addition to racing on the flats, it has also been the site for a few TV and movie scenes, including, Knight Rider, Independence Day, and Pirates of the Caribbean – At Worlds End.  The scene where Jack Sparrow is pulling his ship through sand, that is the salt flats – right where were (give or take 10 miles)!!

While the entertainment on the flats is a lot of fun, there is also a lot of history with them as well. 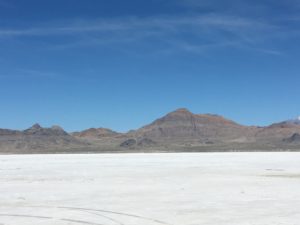 Toward the center of the flats, the salt can be as much as five feet thick.  On the outer edges though, it is a crust, only a couple of inches thick.  When it rains, the edges form a muddy salt bed.

You can walk out on the flats, but, they advise against driving on them… 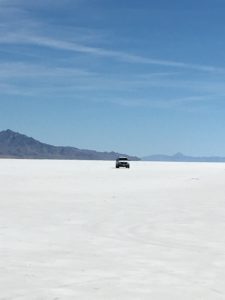 ,,,obviously, people do not heed that advice very well.  It is a hefty fee if you get stuck out on them.  Not to mention what the salt will do to your vehicle.

It is believed that one of the first people to cross the salt flats on foot, was Jedediah Smith, a trapper and explorer, back in 1827.  In 1845, John Fremont crossed, trying to find a shorter route to the Pacific.  The route he took, became known as, Hasting’s Cutoff.

It was this cutoff though (which was supposed to be faster), that was the downfall of the famous Donner Party.  (I have always found stories about the Donner Party to be interesting, and I’m excited when I find out details that I didn’t know – in this case, that I was looking out over the spot that actually doomed them).  The Donner party ended up getting delayed on the salt flats when they took the Hasting’s Cutoff.  Their wagons became stuck in the mud, just below the crusty surface of the salt.  They had to abandon the wagons, and as recent as the 1930’s, they were finding wagon parts from them.  As recent as 1986, wagon wheel ruts from the Donner Party, were discovered by archaeologists!  The delay on the salt flats caused the Donner Party to not reach the Sierra Nevadas until winter.  It was this delay, and the timing, that ultimately took its toll on the party.

Fifty years later, the salt flats saw their first use as a raceway!!  A man from Cheyenne, Wyoming rode his bicycle across the flats in just 22 hours!

And there you have my brief, but interesting take on the great Bonneville Salt Flats of Utah!

Oh, and before you go shaking that container of Morton salt on your supper tonight, don’t worry, the Donner Party didn’t walk through it.  Table salt is not derived from the salt there.  However, the salt that they de-ice your roads with (if they still do that), and the salt that you put in your water softener (made by Morton), and the salt licks that you give to your critters, that does come from there!

Stay salty! (but don;t lick your cows salt block- you never know who was on it)… 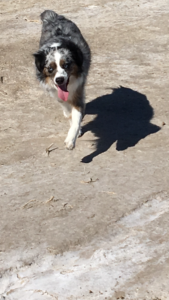