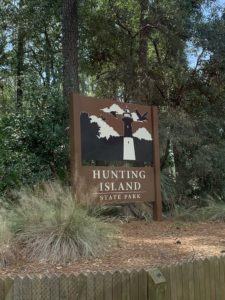 Another stamp in the Lighthouse Passport book, as well as another notch on the Bucket List!  This time it was a day trip to Hunting Island in Beaufort County, South Carolina. 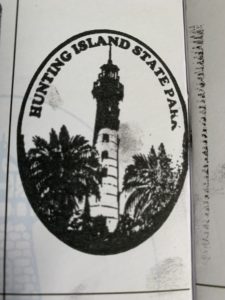 I absolutely love lighthouses!  Each one has its own unique story and place in history.  Maybe it is because of my love for being near the water, that I am so attracted to these beautiful, nautical structures.  There is just something about standing on the deck at the top of a lighthouse, and looking out over the water, that is so calming to me.

We got lucky with our visit to Hunting Island Lighthouse.  It turns out, that this is the ONLY lighthouse in South Carolina that is open to the public!  With all of the other lighthouses in the state, this is the only one that you can actually go in (and get a stamp in the Pass Book)!  Did not know that until we were there!

The Park, built in the 1930’s, is 5,000 acres with 3 miles of shoreline.  It has come a long way since Blackbeard stayed here!  It is a beautifully constructed park, complete with bathrooms and showers for the beach-goers, miles of hiking trails, sandy beaches, a gift shop, lighthouse, and a hatchery.  The island is home to, and a nesting ground for, the endangered Loggerhead Turtle.  The lighthouse is located right in the middle of the park. 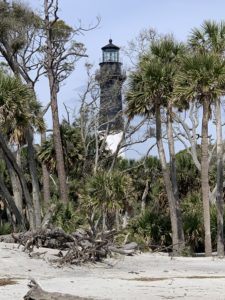 Getting to it was easy.  We parked in a lot adjacent to the beach trail, and walked out to the beach.  From there, it was just a short walk down the beach, where the waves wash up and over your feet, making me almost wish that we were there to swim! 🙂 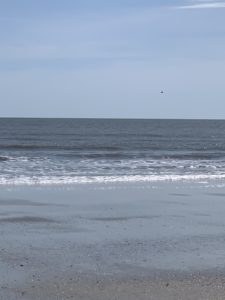 The path up to the lighthouse is lined with informational signs telling you about what you will find throughout the park and on the beach. 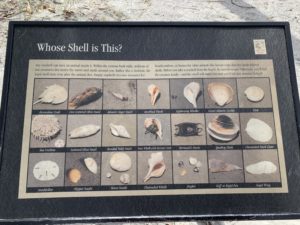 Where the lighthouse stands today, is not the original location.  The lighthouse was originally built in 1859, but was destroyed at the beginning of the Civil War.  It was destroyed so that the Union would not use it as a means of navigation.  However, in 1875, it was rebuilt to warn ships to stay away.  The coast in this area is dangerous due to sandbars, shipwrecks and currents.  When it was reconstructed, someone had the forethought to build it in a way that it could be dismantled in case it ever needed to be relocated.  In 1889, that is exactly what happened.  Due to the beach eroding, it had to be moved inland 1 1/4 miles from where it stood.  This is where it stands today. 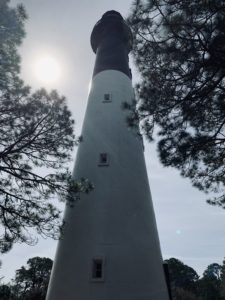 It is open to the public for touring, on a first come first served basis.  They only allow 6 people at a time to climb to the top, so we were put on a waiting list.  Because I was quickly becoming annoyed with people who try to buck the system (the group of 4 adults and 5 children who were trying to convince the workers to let them all go up together, despite being told “no” multiple times), we used our “wait” time to tour the lighthouse grounds. 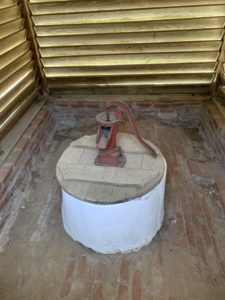 Straight ahead, you can see where the lighthouse keepers house once stood. 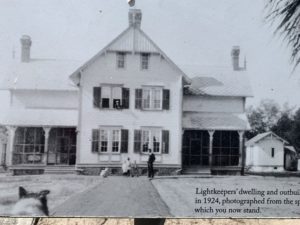 They have a picture of what the house looked like back in 1924, but today you can only see where the foundation of the house once stood.  It was actually 2 “homes” within the building (kind of like a duplex today).

In addition to the home, they had outbuildings for livestock, and a fairly large garden. 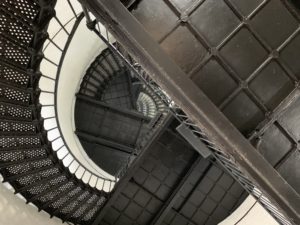 Once inside the lighthouse, it is a climb of 167 winding, spiral steps to get to the top- which is 132 feet in the air.  At the top, they have the original frame that held the lens and oil lamp, on display. 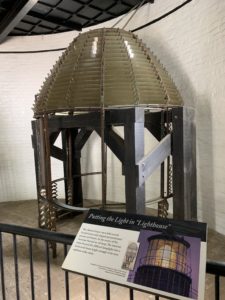 The beam of light can be seen over 18 miles away. 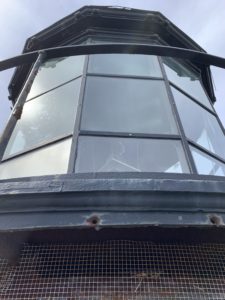 If you step out onto the deck, you can get a beautiful view of the surrounding marshes and miles of shoreline.  It is absolutely breathtaking to be out on the deck, looking out. 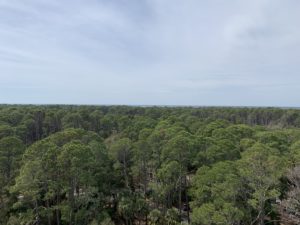 Today, the lighthouse is only about 400 feet from the water mark at high tide.  If the erosion continues at the rate is now, they expect they may have to move the lighthouse inland once again.  It is a good thing that they built it to be dismantled! 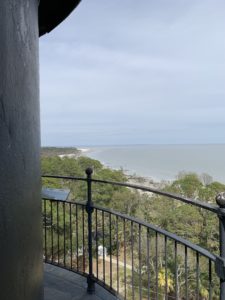 This was a really fun day trip!  It was kind of like island hopping to get there, and once there, there was so much to see and do!  I would absolutely go back there again! 🙂