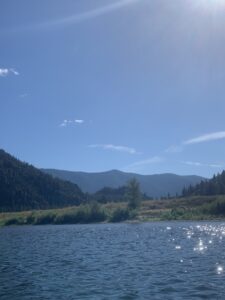 “Each mile on a river

will take you farther from home

than a hundred miles on a road.” – Bob Marshall

As I made my way into Montana this past week, the Clark Fork River followed me, twisting and winding its way right alongside the interstate as I drove.  There is something about the water, whether it is the crashing waves of the ocean, the silence of a large lake, or the power of a mighty river, that I am drawn to.  As I watched the river follow me, I thought about how much fun it would be to just pull over, unload the kayak and just paddle my way to my destination (after driving 35 mph all the way through Missoula, it might not have been a bad option 🙂  ).

I arrived in Thompson Falls right at sunset, and the setting sun reflecting off of the river was just beautiful.  I was very hopeful that we would be able to get a day to go out and float the river.

The weather the next day was perfect – lower temps than it had been previously, and just slightly overcast.  A great day for paddling.

One of the longest rivers in Montana, the Clark Fork stretches for right around 300 miles.  It originates just west of Butte, Montana and flows into Idaho where it turns into Lake Pend Oreille.  Named after William Clark (Lewis and Clark expedition), the Clark Fork increases in size and strength as it crosses Montana.  It starts off as just a narrow river where it begins in the Warm Springs Wildlife area.  Feeder streams along the way, make it a more sizable river by the time it reaches Missoula, and by the time the Flathead feeds into it, it becomes a huge river – the largest in the state!  The depth and current vary, with large and small rapids forming occasionally. 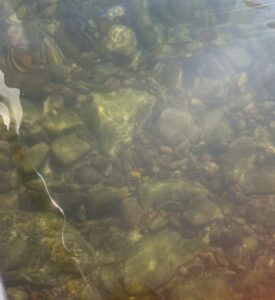 Once the river reaches Missoula, it flows through a valley (the Bitterroot Valley) for about twenty miles or so, before re-entering the mountains.  Here, the river is surrounded by mountain ranges – The Bitterroot Mountains, Coeur D’Alene Mountains and the Cabinet Mountains.  It is surrounded by forest, rock cliffs and the railway which runs alongside of it.  It is wild and beautiful. 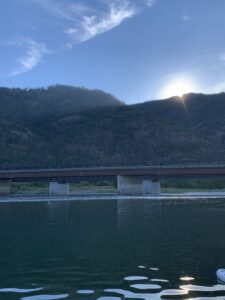 Paradise, MT is a small town that sits along the Clark Fork River, in between the Coeur d’Alene Mountains and the Cabinet Mountains.  It is where the Flathead River feeds into the Clark Fork.  It was also the spot where we would be ending our float trip.

We loaded up the truck with all of our float gear – kayak, raft, SUP, paddles, coolers and bags, and left Thompson Falls, headed for Paradise.

The take-out area was pretty busy.  It was obvious we weren’t going to be alone on the river.  We parked the car, piled into the truck, and headed down the road for the area we would be putting in at. 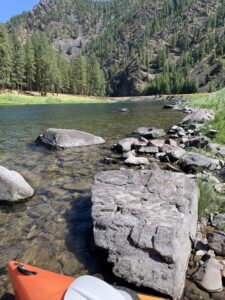 Cascade Campground sits along the Clark Fork in the canyon bottom, surrounded by Douglas Fir and Ponderosa Pine trees.  It is an absolutely beautiful area.  Directly across the road from the campground, sits the Cascade boat launch. This was where we would be putting in at.  I am not exactly sure, but I think our float trip would end up being a distance of somewhere around 6 miles. 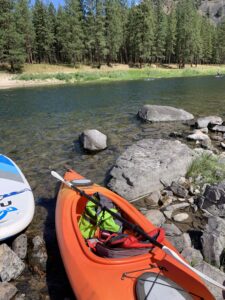 The boat launch was busy.  We parked the truck, and unloaded the kayak and the SUP.  While we waited for the launch to empty, we inflated the SUP and walked both down to the river edge.  By this time, the ramp emptied out, and we were able to get the raft in the water as well. 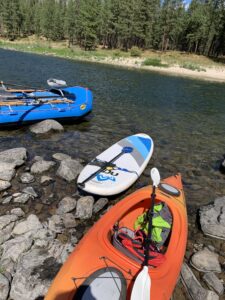 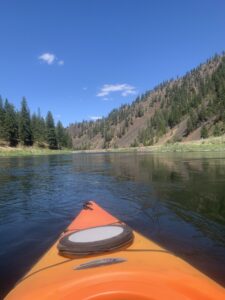 We pushed off, and away we went! 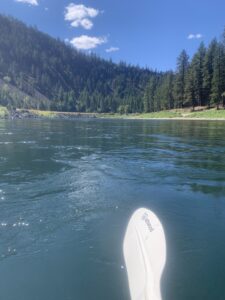 The first thing I noticed as we started off down the river, was the incredible peacefulness.  We were not the only ones on the river – the section we were floating is actually a pretty popular section to float – but it didn’t matter.  It was relaxing from the moment we got on the water.  For the most part, people stayed spread out far enough from each other, that you never really got close to another float.  At times, you couldn’t even see them. 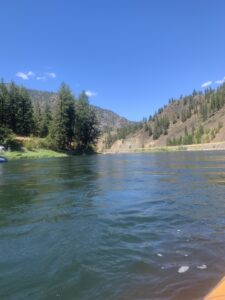 The water in this area was calm.  In some areas, the forest came right up to the river edge.  In other areas, there were sandy beaches and gravel sand bars.  It seemed like the perfect place for a bear to wander down, but I never did see one (but, oh, how cool would that have been!?).  Nonetheless, I kept my eyes open for any sighting of elk, sheep, bear, beaver, birds – pretty much anything. 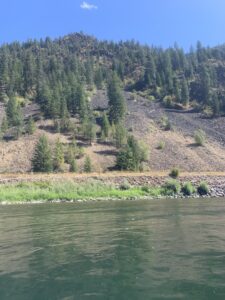 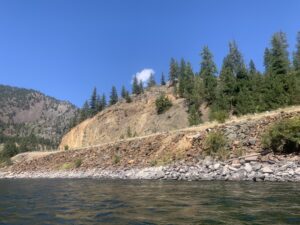 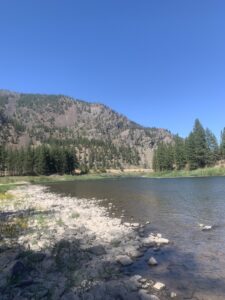 As we paddled our way through the twists and turns of the river, occasionally we came upon some small rapids.  These were a lot of fun!  Big enough to add a little excitement to the paddle, but not so big that I hesitated to go through them.  Unfortunately, I do not have pictures of them…I thought it best to hold on to the paddle, and not the camera…. 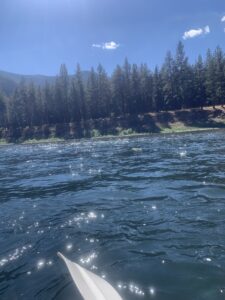 By lunchtime, we pulled off of the river onto a little gravel bar.  We got out, stretched our legs, and had a little lunch that we had packed. 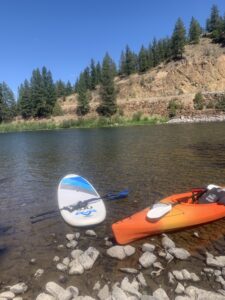 We were in a little grassy area that was covered in wildflowers.  Right above us, a sloping hill rose up to meet the trees and allowed the sun to shine through.  It was a nice relaxing area to just kick back and have lunch, while taking in the peaceful scenery. 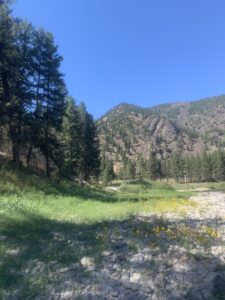 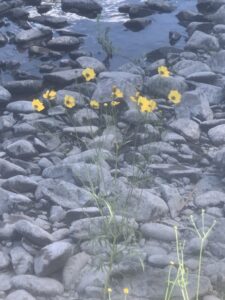 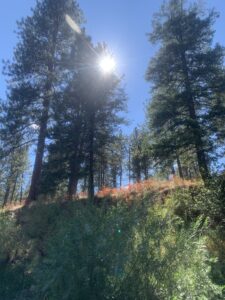 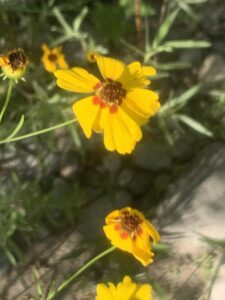 After a short break, we were back on the river. 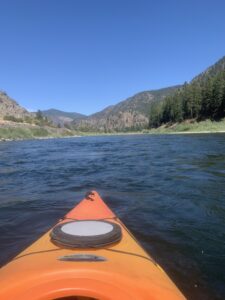 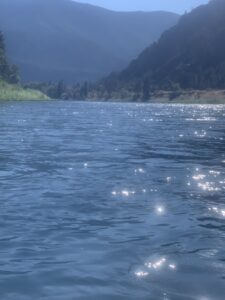 I tried my hand at the SUP, and found it was not nearly as intimidating as I thought it would be!  It was actually a whole lot of fun!  I switched back to the kayak though as we approached another section of small rapids. 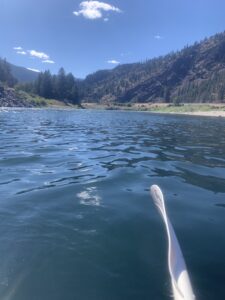 We paddled through that section, and it gave way to a rocky area along the river.  The jaggedness of the rocks and the way they protrude with such force, was awesome to look at. 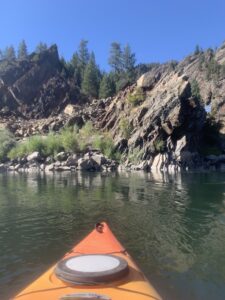 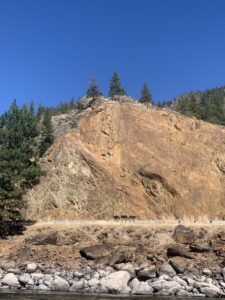 The railroad runs along the river, and through the rock formations. 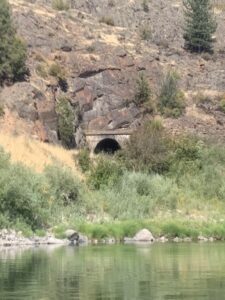 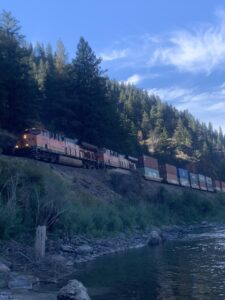 The next hour or so was spent just paddling along, taking in the scenery. 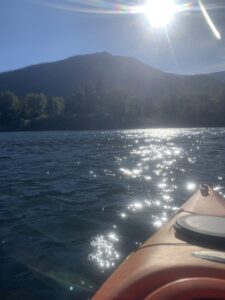 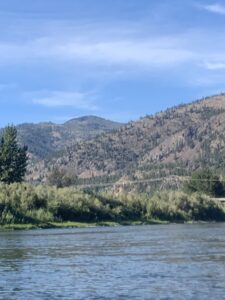 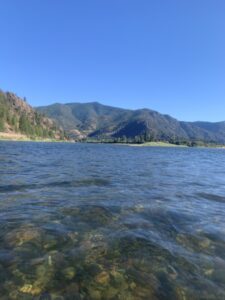 Eventually, as we rounded a bend in the river, I saw the highway bridge, letting us know we had come to the end of our float trip. 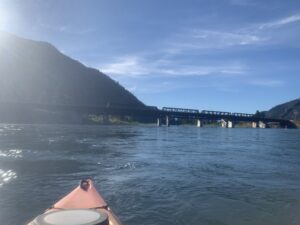 As I paddled toward it and rounded the curve to the take out area, I finally saw some wildlife (and not-so-wild life)…

After going back to get the truck, we got everything loaded and headed home.  It was a perfect day on the river.  When Bob Marshall said “every river is a world of its own”, he was right…and what a beautiful world the Clark Fork River is.