The Mojave Desert, in southeast California, is famous for a few reasons – it has the hottest air and surface temperature ever recorded on earth, and it also has the lowest elevation in the U.S.  It is extremely dry and dusty here.  There is an endless view of desert floor, with very little shade.  At a quick glance, it seems very desolate.  But, hang around for a little bit, and it starts to grow on you. 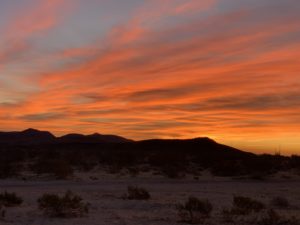 You begin to notice the beautiful sunrise early in the morning.

The Joshua Trees that break up the landscape. 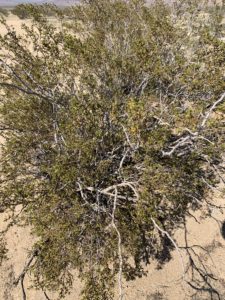 The cacti and Creosote Bushes that somehow manage to grow in one of the driest places on earth. 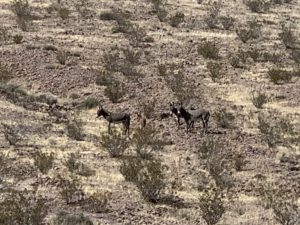 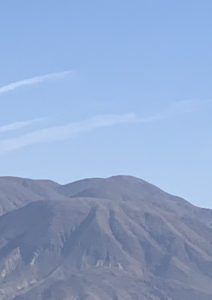 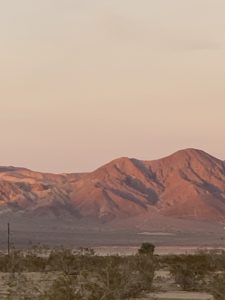 The peaks of the surrounding mountains, rugged by day, and at sunset, reflecting the brilliant oranges and reds of some of the most gorgeous sunsets. 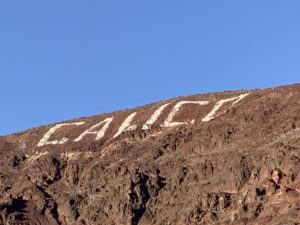 More than just beautiful scenery, the mountain ranges of the Mojave Desert are full of adventure and history.  Among them, the Calico Mountains offer hiking, 4-wheeling, interesting rock formations, and a lot of mining history.  It is also home to one of southern California’s top ghost towns.  Not far from where we are staying, we decided to check it out!

Come along as we walk the streets and learn a little bit of the history behind Calico Ghost Town. 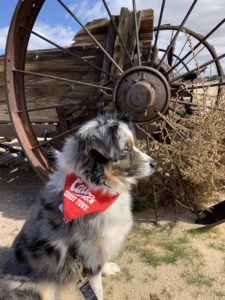 The first thing you need to know, and this is very important – Calico Ghost Town is PET FRIENDLY!!!!  Not only can your best fur-friend walk the streets of Calico with you, but they are allowed inside the buildings and shops as well!  Even the Saloon!

The second thing you should be aware of, is there IS a small fee to get in, as well as a small fee for some of the attractions (mine tours, train ride).  It really is a small fee, and admission is free if you choose to camp there. 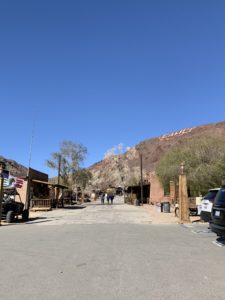 Back in the day, the town of Calico was a silver mining town, and, by all standards, was a very wealthy town.  Between 1881 and 1907, Calico had over 500 mines, a population of almost 4000 and produced over 86 million dollars in silver!  When the price of silver dropped, so did the economical stability of Calico.  In less than 10 years, Calico would become abandoned. 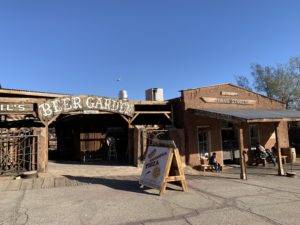 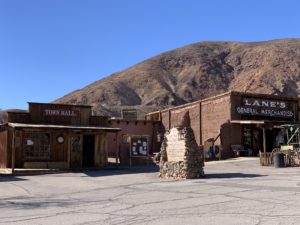 The Park Office and General Store 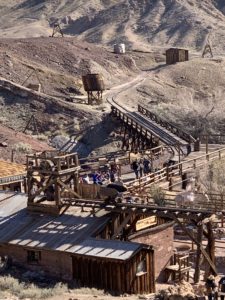 Buildings for some of the mines 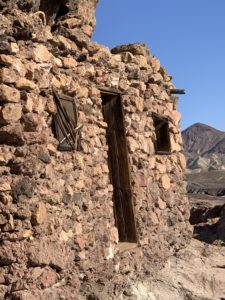 A few of the houses.

The School house that is currently there, is a replica, but is in the exact location as the original. 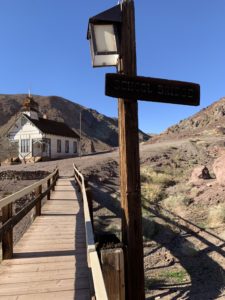 The schoolhouse is one of the “haunts” of Calico.  They claim there have been sightings of both teachers and children inside of the school.  The doors are locked and you cannot get in, but you can get a good look at the entire inside, through the windows. 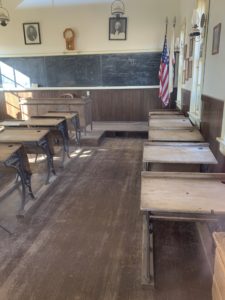 People have claimed to see the teachers looking out of the windows, and children walking around inside near the desks.  Apparently these apparitions have always kept to themselves, and with the exception of one girl – around the age of 11 or 12, they stay inside the schoolhouse.  Perhaps they only haunt during the school week, it was pretty empty when I looked in…

The Maggie Mine is another one of the “haunts” of Calico.  Purchased by John Mulcahy in the mid 1880’s, he named the mine after a song that was popular during the silver strike. 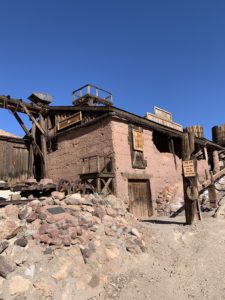 We did walk through the mine, and it is the only mine deemed safe for people to walk into.  They allow you to go about 1000 feet down into the mine. 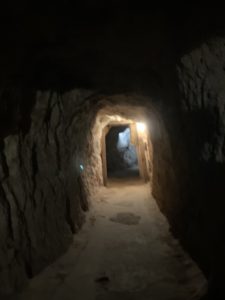 They have displays set up along the way, so that you can get a feel for what it was like back when it was an operating mine. 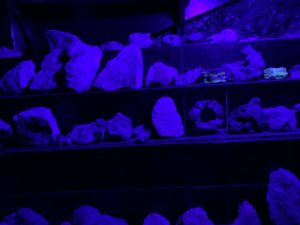 When you first walk in, there is a black light display showing you all of the minerals that are found within the mine.  Silver still lines the walls of the mine as you walk along.

They say it is haunted, and that people have felt their clothes get tugged on, their arms get brushed up against, some people even claim to have had their faces touched while inside the mine.  I guess the ghoulies were on their best behavior this day as I didn’t feel anything other than the very uneven ground beneath my feet. 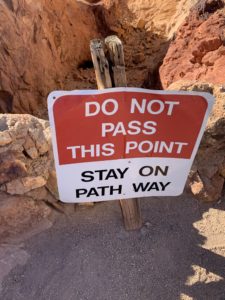 Upon exiting the mine, we climbed around a little bit above the mine.  Signs are posted everywhere warning you not to go beyond certain areas.  The ground is still very unstable. 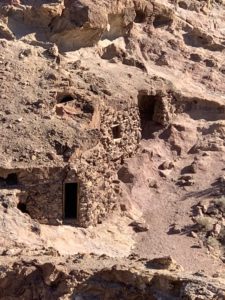 We did not ride it, but if you want to get a good look at the town and surrounding area, there is a little railway that will take you around and give an audio tour. 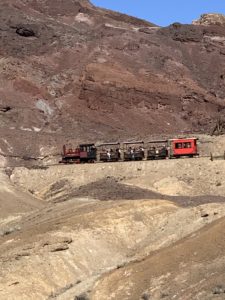 Though not the original railway, there was one here when it was an operating mine town.  It was used to cart the silver out of the mines. 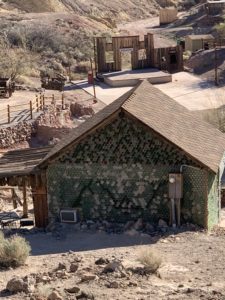 When you come out of the mine, there is a “Bottle House” below the mine.  This house is not the original, it was built in the 1950’s when the town was purchased by Walter Knott (yes, the same Walter Knott of Knott’s Berry Farms).  The house is made entirely of bottles, which was a very popular way to construct a shelter back then if lumber was not available.  Whiskey bottles were the most popular bottle to use, as the saloons sold a LOT of whiskey and the bottles were just discarded. 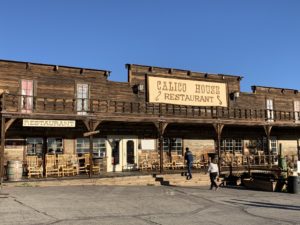 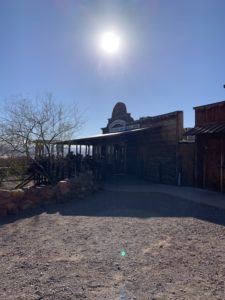 We wandered into the Miners Cafe for a bottle of water.  They offer a variety of sandwiches and snacks.  They also have an ice cream stand inside.  We got our water, but also found a bottle of Butterscotch Root Beer!  I had no idea that this was a thing! 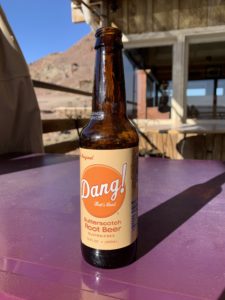 Dang! That was good root beer!  If you have not tried it, you are missing out!

Across the way is Dorsey’s Dog House.

Named after Dorsey, the dog of Calico, famous for carrying the mail, Dorsey’s is now a little shop that sells everything dog! 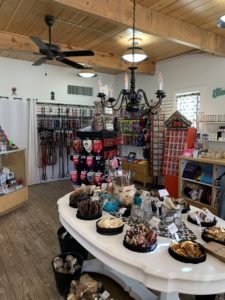 There are quite a few merchandise shops along the way where you can find gifts, clothing, postcards, pretty much everything you can think of.  There is even a Starbucks located in one of the shops! 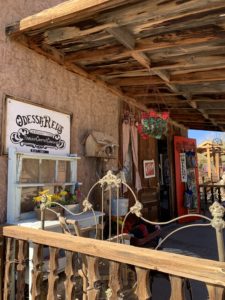 Calico Ghost Town is a tourist attraction.  While it has a lot of modern touches – the shops, restaurants, false front buildings, there is still an air of originality to it.  Like the silver in the mines, there is a lot of history buried in the side of the mountain.  Literally- there is also a cemetery just below the town.

It made for a fun afternoon, and it was very interesting to walk around and see the mines and the ruins and partial foundations of building that once were. 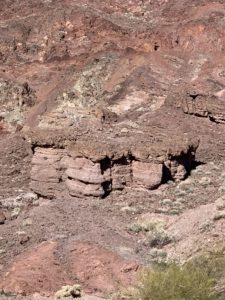 It is amazing to me to think that at one time, Calico was a bustling town, considered to be quite wealthy.  This is an area, in the middle of the desert, which even today, is not populated.  These people lived here in the heat of summer with no air conditioning, and I would imagine, little access to water. 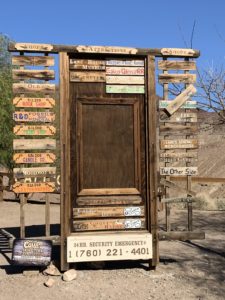 Located just a few miles from I-15, if you are passing through, it makes for a nice little stop to get out and stretch, walk around and grab a bite to eat or get a coffee.  And if you happen to see a lady dressed all in white wandering around lost, don’t mind her….she isn’t really there (although some would disagree with me).