I have to say, it has been a really busy month (add a week or two to that!).  I have not been getting posts up as often as I want to, but that doesn’t mean that I won’t get them up!  There will just be a few “adventure” posts that are a little behind!  Life happens (and entire wheel assemblies fall off of trucks going down an interstate apparently), but I will get back on track here! 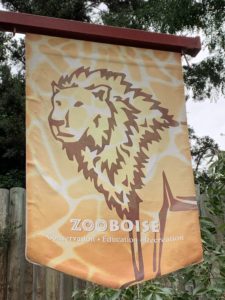 The zoo has come a long way!  Gone are the days of walking through a zoo and seeing all of the animals just existing in a cage.  Today, they are a complete learning experience, dedicated to protecting and preserving animals from all over the world, along with the natural habitats that they live in.  Zoo Boise is an excellent example of this!

Zoo Boise is located in the heart of downtown Boise.  The weather was perfect for a day at the zoo – a little overcast, and not so terribly hot like it has been for a few days now.  Everyone else must have thought the same thing, because the parking area was completely full!  It could have also been the fact that they just opened a new, two and a half acre exhibit within the park – The Gorongosa Exhibit – intended to bring a little taste of Mozambique’s Gorongosa National Park to the area.

When you purchase your ticket for Zoo Boise, part of that admission price goes towards a Conservation Fund.  They hand you a token, and just inside the gate, you have a choice of which conservation project you want to support.  Just drop your token in the project of your choice.  So far, Zoo Boise has been able to generate more than two million dollars to go towards wildlife conservation projects, not just in Idaho, but all over the world.

Once inside the park, we had a hard time deciding where to start. 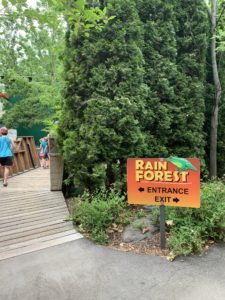 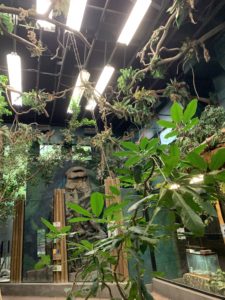 We headed first to the Small Animal Kingdom.  This is where they have an indoor Rain Forest.  One of my favorite exhibits in the Rain Forest was the Aldabra Tortoise, also known as “Mr. Mac”. 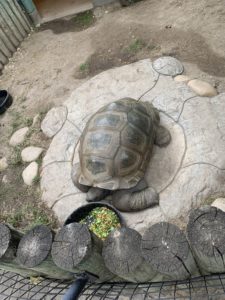 Mr. Mac was born around 1920, and came to Boise in 1979.  Mr. Mac tips the scales at about 356 pounds!  That’s pretty impressive for someone who eats mostly dry grass and fallen leaves!

Other exhibits in the Small Animal Kingdom were, 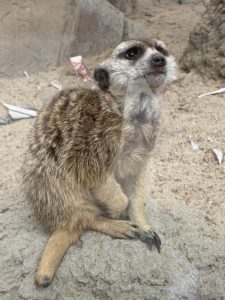 Slender Tailed Meerkats – Don’t let these cute little ones fool you.  Even though they are kept as pets in some parts of the world (you need a special permit in the U.S.), if you get too close, they can hurt you with their long, powerful claws (just ask the little girl in the gift shop that got too close on the day we went). 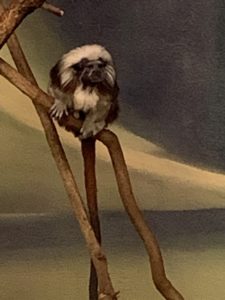 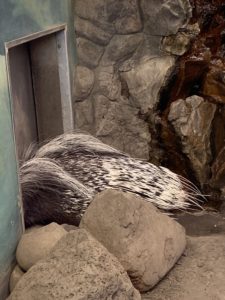 The African Crested Porcupine (who obviously did not want his picture taken). 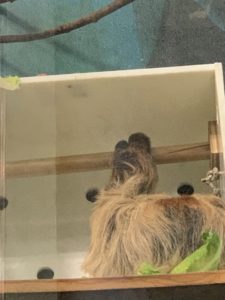 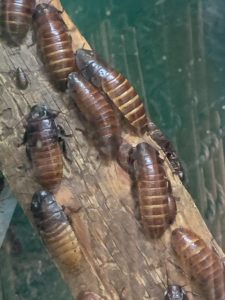 And these guys, the Madagascar Hissing Cockroach.  They say they make great pets….I think I will pass.

We left the Rain Forest, and headed over to the Butterfly Exhibit.  On the way, we passed a tiger napping in the sun. 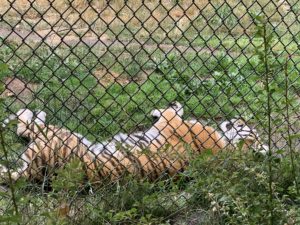 At Butterflies in Bloom, you are invited to walk into the enclosed area where there are literally thousands of butterflies flying around and landing everywhere.  They ask you to watch your step, so that you do not accidentally stand on them, and you are not allowed to touch anything within the exhibit – especially the butterflies!  When you exit, they put you in a little room and check to make sure none of them are trying to make an escape on your clothing! 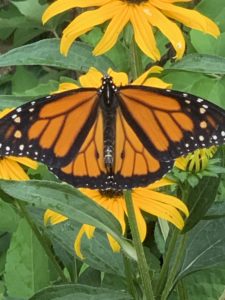 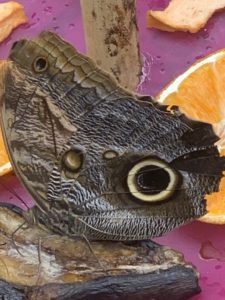 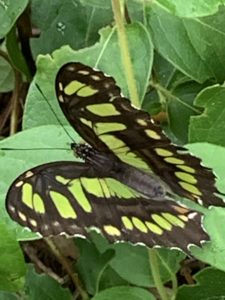 Next, we wandered through the Pampas and through Asia.  In the Pampas, the Anteater hid from us, but we did see the Maned Wolf.  Since they are active at night, we only got to see him curled up and sleeping.  Apparently, they have incredibly long legs that enable them to see above the really tall grasses that they hunt in. 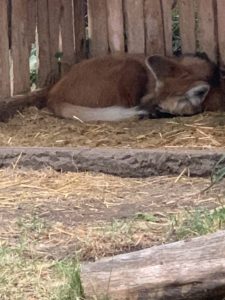 I will say, the Maned Wolf smelled very strongly of skunk when we went past…. 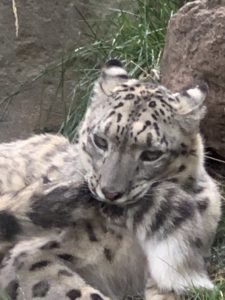 In Asia, we saw the Snow Leopard, who was very nervous and chewed her tail almost the entire time we watched her.

We left Asia, and entered the African Plains.  This was where some of my favorite animals were! 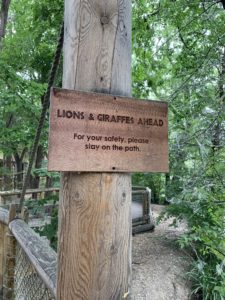 First up, the Lions! 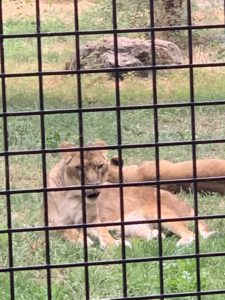 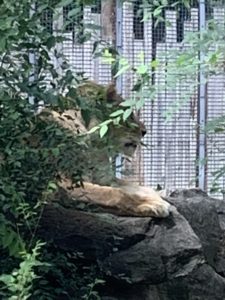 Lions actually spend about 20 hours a day sleeping and resting, so that is what they were mostly doing while we were there. 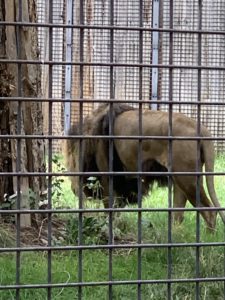 Just when you think no one is going to do anything though, the King of the Jungle himself got up and walked around – lazily, but still walked around!

Around the corner was another favorite of mine – 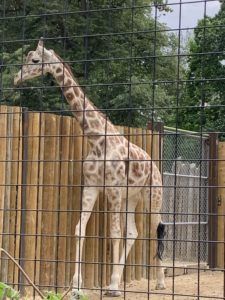 Even though a giraffe has the longest neck of all living species, they still only have 7 vertebrae in their neck!  Each individual giraffe also has its own unique markings!  At birth, babies are over 6 feet tall! 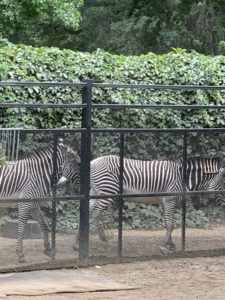 Another animal that has its own unique markings, is the Zebra (but everyone already knew that).

Fun fact about the zebra – they are usually the first ones to move through an area, due to the fact that they will eat the coarse, rough grass, leaving a smooth path for other animals to follow. 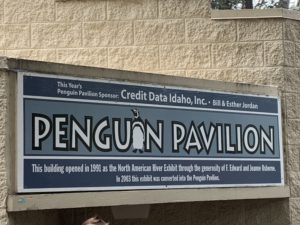 We walked through Penguin Pavilion on our way to Gorongosa National Park. 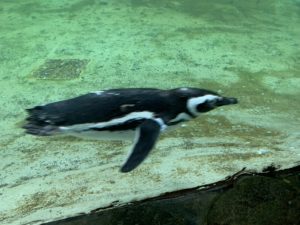 The Gorongosa National Park is the newest edition to Zoo Boise.  Once in the Park, we got to see, up close, African Wild Dogs and Hyenas. 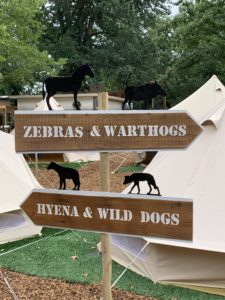 They were just past the Crocodile on the Nile… 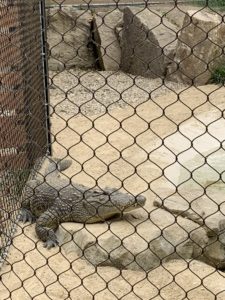 I don’t know if he was really on a Nile…it looked more like a pond. 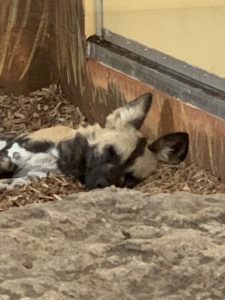 An African Wild Dog has a bite of 340 pounds per square inch! 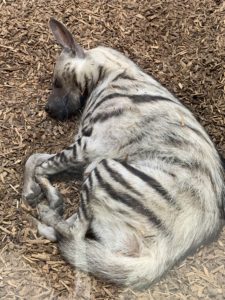 I have to say, the Baboon was the most entertaining exhibit in the Gorongosa National Park!  But, baboons usually are pretty entertaining, 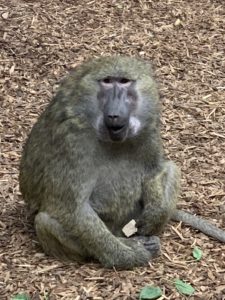 There were probably quite a few animals that I did not get pictures of (throughout the whole zoo), either because they were not out, or people were just in the way of a good picture.

It was a great day at Zoo Boise!  Fun to see so many animals, and so educational at the same time.  It has been quite a while since I have been to a zoo, and I have to say, the day spent at Zoo Boise was definitely worth spending!