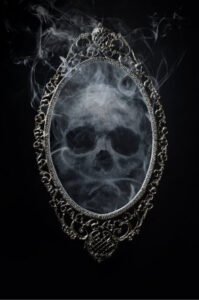 What better time to share some spooky adventures, than on Halloween?!  In our travels, we have visited places that are said to be haunted.  I thought I would share a few … 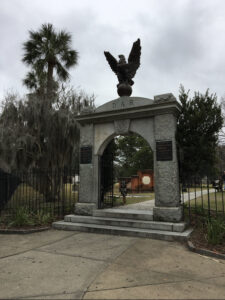 Savannah, one of the oldest cities in Georgia, is full of haunted stories and ghosts of the past!  The Colonial Park Cemetery in the middle of historic downtown, is full of history and spooky stories!  This cemetery is the final resting place for many of Savannahs residents.  Established in 1750, it filled to capacity (despite being expanded several times) when Yellow Fever swept through the city in 1820.  By 1853, it had closed its gates.  By 1864, the Civil War was at its climax.  While the Union troops made their way through Georgia, leaving a path of destruction, Savannah was actually spared – all but the Colonial Park Cemetery.  It is rumored that Union troops stayed in the cemetery, making temporary homes out of the burial vaults.  Their presence here is said to have angered the spirits of those buried in the cemetery.   Other stories of the cemetery include that of Rene Rondelier – one of Savannah’s infamous killers.  He was a large, disturbed man, who lived next to the cemetery.  He was known to capture and torture people in the area.  He would then take them to the tunnels underneath the cemetery, where he would kill them.  One day, the bodies of two young girls were found just outside of the cemetery.  Rondeliers footprints next to the bodies, would soon lead the people to him.  Fearing that nothing would stop him, other than death, a mob of residents hung him and left him for dead.  The murders continued, even after his death. Some claim that he was able to free himself, and continued on his murderous rampage.  As the years passed, it was said that his ghost has been spotted wandering the cemetery. *I should add as a side note to this story, that it is most likely just that – a story.  Some people claim that no such killer existed in Savannah.  These are just two of the many spooky stories attached to the Colonial Park Cemetery. 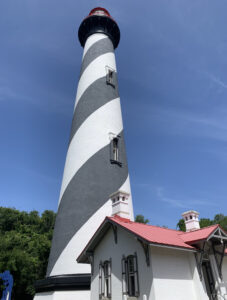 Like Savannah, St. Augustine is also full of haunted stories.  One of those stories – the tragic story of the Pittee sisters, takes place at the lighthouse.

Constructed in 1871, Hezekiah Pittee moved from Maine with his family to oversee the construction of the St. Augustine Lighthouse.  He brought with him, his four children – three girls and a boy.  The construction site turned into a playground of sorts for the children.  The railway cart that was being used to move supplies from the ships to the building site, became a “ride” for the three girls and their friends.  One day, the Pittee girls climbed into the rail cart.  They did not have the wooden side in place to hold the cart on the tracks, and the cart took off.  As it traveled over the water, the cart fell from the tracks, down into the water.  The cart came to rest on top of the girls, pinning them underwater.  A worker saw what happened, and raced to save them.  He was able to save only one of the girls.  The Pittee family returned to Maine to bury the other two children.  Over the years, strange happenings have occurred at the lighthouse, and it is rumored to be the ghosts of the Pittee girls.  They appear to be playful ghosts, playing hide and seek in the tower, giggling and running around.  One lighthouse keeper tells the story of locking up one night, when he heard loud giggling and running upstairs.  Thinking he had locked people in accidently, he went back up to the tower.  No one was there, but, he then heard the giggling and footsteps as they ran down the steps.  Others have claimed to hear the same sounds over the years.  Is it just the wind?  Or do the spirits of the Pittee girls really spend their nights playing on their “playground”.  Click here to read our post about St. Augustine. 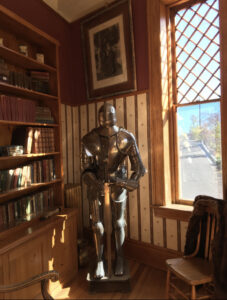 Manitou Springs in Colorado, is home to the annual Coffin Races every Halloween.  This is an event all in itself, but if you go for the Coffin Races, be sure to stop in and visit the Miramont Castle!    Originally built in 1895 by Father Jean Baptist Francolon, he lived here alone with his widowed mother until the early 1900’s, when it was used as a sanitarium for the treatment of Tuberculosis.  Today the castle is a museum, decorated as it would have been when Father Francolon lived there.  They even serve High Tea in the Tea Room.  The lady who runs the front desk is more than happy to share rumored stories (I can assure you, she is a firm believer in the stories she tells!) to include hearing footsteps and voices when no one is there, lights that just happen to turn on (or off), objects that disappear, and apparitions that appear in mirrors and windows. 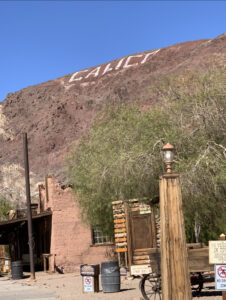 Just off of I-15, between the towns of Barstow and Yermo, nestled in the Calico Mountains, is Calico Ghost Town.  Once home to over 500 mines, this town was only occupied for about 12 years and had about 3500 residents.   Between 1881 and 1907 though, Calico was a wealthy town.   By the beginning of the 20th century, the small town was completely deserted.  Today it is a tourist attraction, where you can walk around and see some of the original mines and buildings that once brought Calico to life.  Among some of the attractions here, a few are said to be haunted.  The schoolhouse (which is a replica set on the original site), is said to have teachers and students that can be seen looking out of windows, or walking around the desks.  They say that, with the exception of one girl, they pretty much keep to themselves and stay inside. 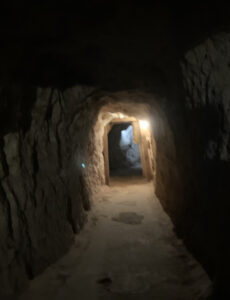 The Maggie Mine is another haunt of Calico.  People have said that they could feel the tug of their clothes and arms as the went through the mine.  Some people even claim that they have had someone that they couldn’t see, touch their face, while walking through the tunnels.

One of the most spotted ghosts of Calico, is that of Lucy Lane.  Lucy and her husband ran the General Store.  Originally they had left Calico when everyone else did, but later returned.  They lived their lives out in the abandoned town.  Lucy had lived to be in her 90’s!  Many people say Lucy can still be seen walking from her home to the General Store, in her long lace gown.  She has also been spotted rocking back and forth in the rocking chairs of the museums there.  Click here to read our post on Calico Ghost Town. 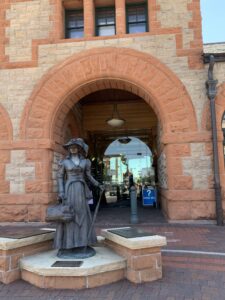 One of the most haunted buildings in Cheyenne, is the train Depot.  Located in downtown Historic Cheyenne, the Depot is said to be haunted by three different ghosts.  They can be heard at night making loud, strange noises.  One of the ghosts is said to be a woman in a long black dress, that can be seen wandering through the halls of the Depot.  She has been spotted outside near the tunnel of the Depot.  Perhaps she is one of the wealthy family members that this tunnel was actually built for.  Another ghost is said to be that of a man who fell to his death while painting the top of the Depot.  He too can be seen wandering the halls and outside grounds.  The third ghost, who people claim to have seen, is that of an “angry” man.  They claim he has been spotted in the gift shop, throwing items at visitors and staff alike.  Don’t let the angry ghosts scare you off though!  There is so much interesting history to be found in Cheyenne, including many different haunted sites.  If you ever have the opportunity to do a walking tour, it is definitely worth taking!  Click here to read our post on Historic Cheyenne.

These are just a few of the haunted places we have visited.  I have posted about a few them, so be sure to check those posts out, if you haven’t already.  The posts go into much more detail and do not necessarily focus on the haunted aspect.